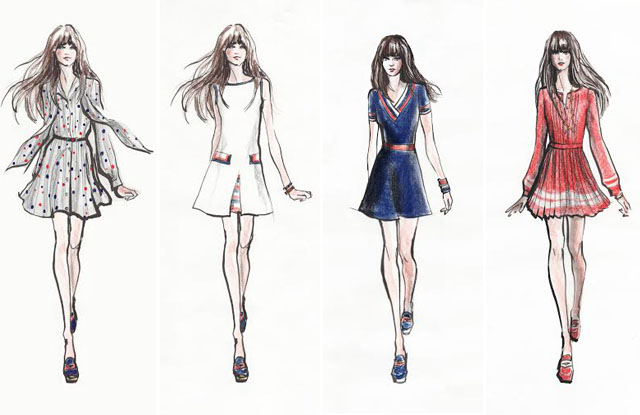 Red hot star Zooey Deschanel is getting even bigger.

The star of the hit sitcom New Girl and designer Tommy Hilfiger have combined to introduce a 16-dress capsule collection. Hilfiger told WWD she is the perfect Tommy girl, “She is the epitome of it—All-American, youthful, fun and funny, and yet she has a sophistication and worldliness to her that’s quite endearing.”

The pair came up with the idea for the collection when they bumped into each other again at a party in Santa Monica, where Mr. Hilfiger admired Zooey’s vintage jumpsuit.

He told WWD, “Somehow, the conversation went from loving vintage, to possibly doing a capsule collection with her.” For her part, Deschanel says that the collaboration is a natural. “Tommy and I share many of the same inspirations—old-school music, classic films and old Hollywood icons,” she says.

The ’60s-inspired look is a little Jean Shrimpton meets Twiggy, featuring shirtdresses and pleats done in oxford cloth, pique, silks, and linens. All of it looks preppy, vintage, and very American, but still new. Zooey says Hilfiger’s “guidance during the design process helped to put a really unique twist on each piece.”

The collection is called To Tommy, From Zooey, and retails between $98 and $199. It will debut at Macy’s on April 14th. The entire collection will be available online starting April 21st.