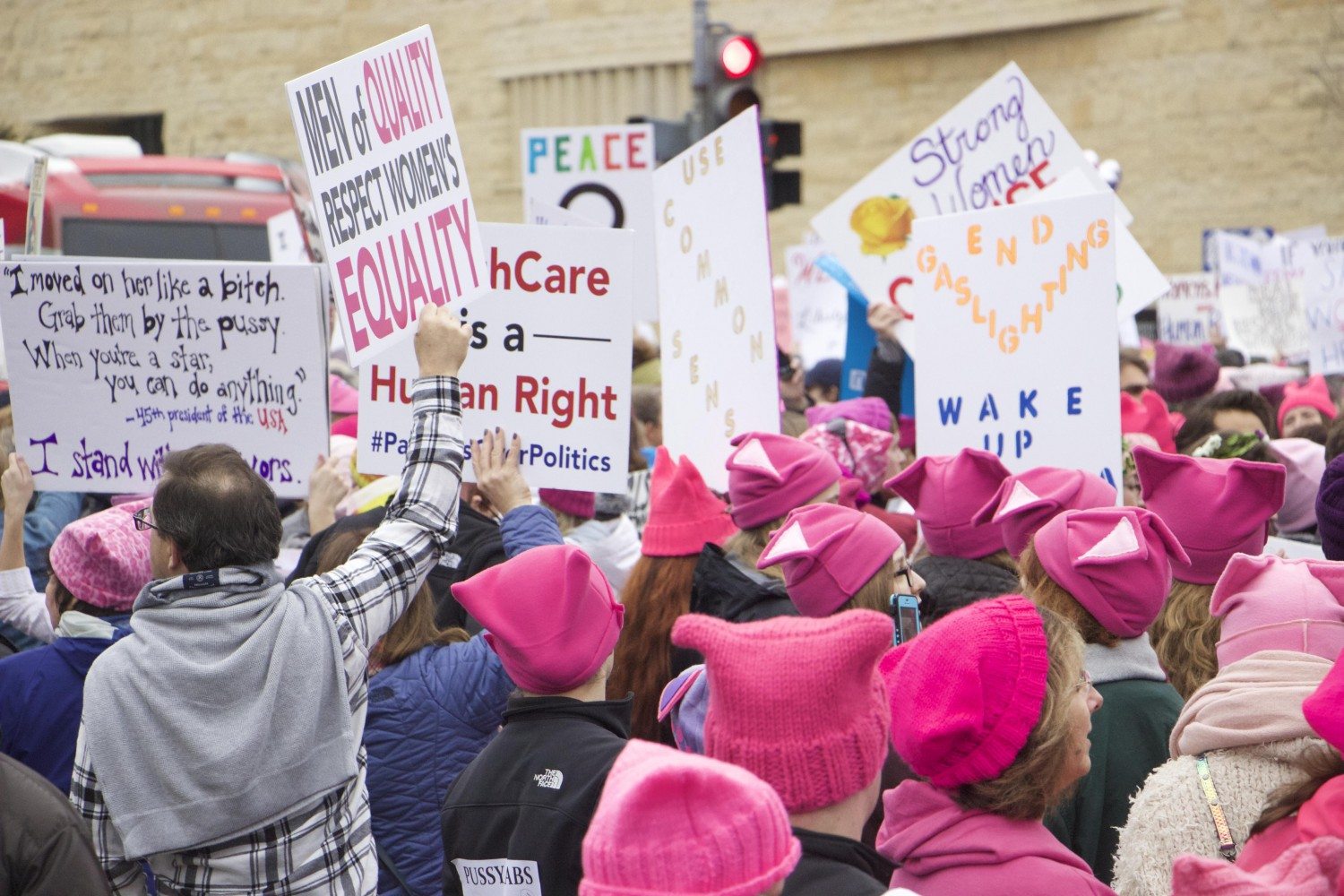 One day after President Donald Trump’s inauguration, the nation’s capital was flooded with a sea of pink hats worn by activists and protesters from around the country.

Sporting signs with slogans such as “Dump Trump” and “We want a leader,” participants of the organized Women’s March grassroots effort snaked down Washington’s streets in opposition of the new president’s ideologies and beliefs. Multiple attendees said they decided to attend to oppose President Donald Trump’s denigration of women, immigrants and minorities.

“This is the upside of the downside. This is an outpouring of energy and true democracy like I have never seen in my very long life,” Steinem said to the crowd. “It is wide in age. It is deep in diversity. And remember, the constitution does not begin with ‘I the president,” it begins with ‘we the people.’”

The official number of attendees has yet to be determined, but the city’s metro system tweeted that over one million people rode the Metrorail on the day of the protest; event organizers had originally sought a permit for 200,000, according to the National Park Service’s permit application list obtained by Politico. D.C. police confirmed Jan. 22 that they had made no arrests related to the march.

Protester Lisa Wisman said she flew in by herself from Michigan after purchasing her plane tickets the week before.

“I just feel like the things that Donald Trump is doing deserve to be protested and he needs to be held accountable,” she said. “He’s made all these promises and lies and the people need to take back their ability to hold their elected officials accountable. And protesting is one of the ways that I’m doing that.”

Joe Giro said he came into the city from upstate New York with friends.

“I want my nine-month old niece to grow up in a world that’s not filled with hate, and at least…where women are accepted,” he said.

President Donald Trump did not comment during the event on Twitter, the social media outlet widely regarded as one of his favorite ways to communicate with the public. However, Hillary Clinton, Trump’s Democratic opponent during the presidential race, used Twitter to show her support for the march.

“Thanks for standing, speaking & marching for our values @womensmarch. Important as ever. I truly believe we’re always Stronger Together,” Clinton tweeted the morning of the event.

Nearby the march, the “Bikers for Trump” group had also reserved a space in the city to hold “an event of celebrations provided by the biker community,” said R.C. Pittman, president of Florida’s Bikers For Trump.

“We’ve opened this park up to anyone who wants to celebrate with us. The women are welcome, protesters are welcome; I haven’t run anybody off. We don’t have any fences up,” he said. In front of the Bikers for Trump stage, both protesters and Trump supporters were sitting and dancing to music.

Ahad Yonus, who donned a hat emblazoned with Trump’s “Make America Great Again” slogan, said he went by the Women’s March protest to “see both sides of the spectrum.”

“Protesting is one of the rights protected by the first amendment, but I feel like the people here might not necessarily know what they’re protesting,” he said. Yonus also denounced riots that had ensued the previous day, saying “protesting is ok, our democracy is working, but that doesn’t mean set a limo on fire, go break a McDonalds and knock all the windows out.”

Following the march, the Women’s March website stated that “millions” of people around the world had participated in total, which included the simultaneous “sister marches” held in locations such as New York, NY, Chicago and Atlanta.