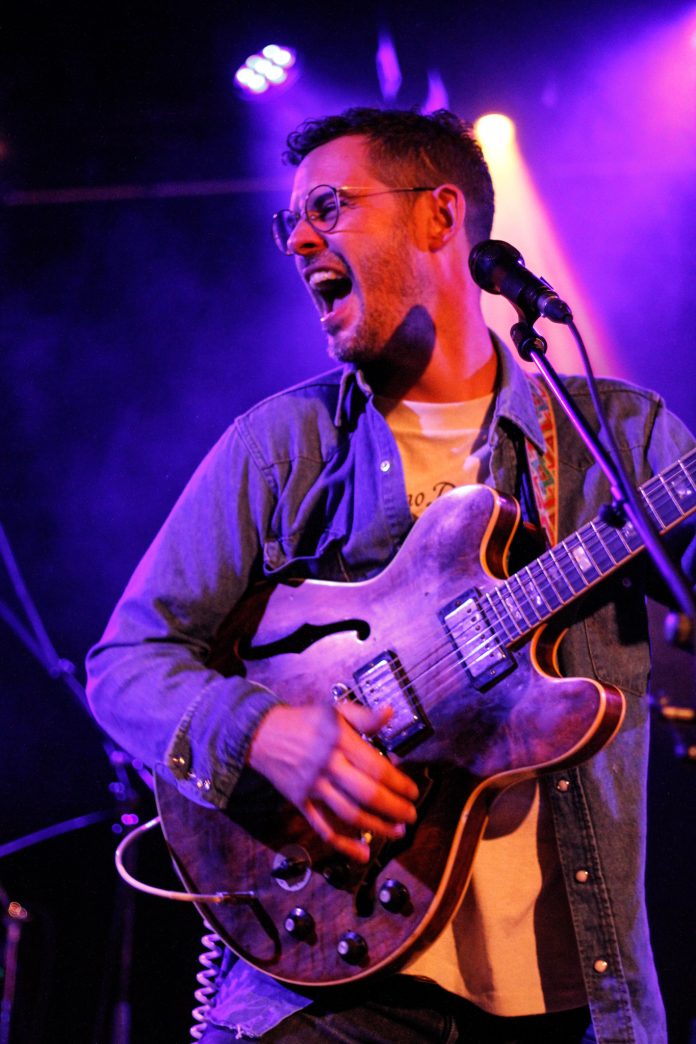 Photos and feature by Alice Teeple

There’s an old adage advising against white clothing after Labor Day, but consider an exception for Austin’s White Denim. A rollicking performance by the Texan quartet at Le Poisson Rouge proves that rock n’ roll is always in fashion.

The extensive lineup of songs blended seamlessly, with nary a break in between. It was quite a sight to behold. The hardcore White Denim fans in the front row were especially enthusiastic: geysers of foaming beer splashing about during raucous pogo dancing; front row fan girls setting their heart eye beams on frontman James Petralli. But Petralli beatifically floated above them all, lost in the music.

White Denim is not a band for the fainthearted; you had better be prepared for the long haul. Pack some granola bars and G.O.R.P for the sonic journey: you’re going places you’ve never expected.

Although White Denim initially sound like they might have jammed with half of Skynyrd in previous lives, they certainly do not shy away from the bombastic stylings of classic prog rock. At times they channel Fragile-era Yes, with their Moog noodling, constantly shifting time signatures, and psychedelic lyrics. But listen closer and you can hear NEU! Influencing Michael Hunter’s keyboard chops; even some 70s-era Stones lurking in Steve Terebecki’s bass. Something for everyone, really: a band to conjure spirits with, or at least imbibe a few.

While all the musicians of White Denim are equally impressive in their musical talents, the remarkable drumming of Greg Clifford stands out as a true tour de force. The man barely stopped once during the 1.5-hour medley of hits, furiously pounding through each song as if he’d sold his soul to the Devil himself. (On Bleecker Street, it’s possible.)

White Denim is currently in the midst of a fall tour supporting their latest album, Side Effects, released in March. They also recently wrapped a triumphant SXSW run with celebrated FLOODfest and Aquarium Drunkard shows. Their unique sound, at once modern and retro, has earned the praises of Mojo, Variety, Q, NME, and The New York Times. Add Downtown to the list; they brought down the freakin’ house.

It is impossible for any studio recording to accurately capture their robust, raw live energy, but this album does not skimp on the richness of their sound.  Like all good jam bands, they are masters of their craft.

Check out some tracks from Side Effects here.