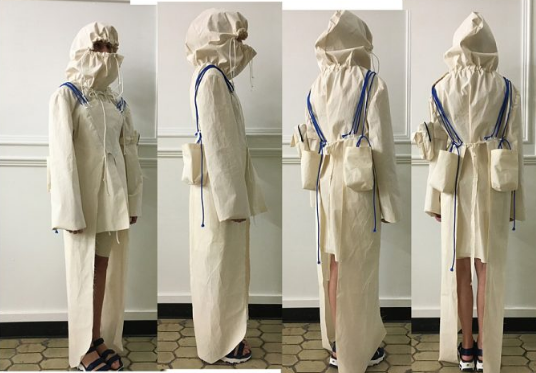 The 1943 Sears News Graphic wrote that the Sears catalog, “serves as a mirror of our times, recording for future historians today’s desires, habits, customs, and mode of living.” Isn’t that is precisely what Jeff Bezos is trying to do today?

If anyone is in a position to buy the Sears name and modernize its catalog for today, it is Amazon. The online behemoth has the distribution and resources to reach millions of homes and to churn out a high volume of clothing at the right price.

It’s no secret that Jeff Bezos has wanted to get into fashion in a big way. Last Thursday, “Common Threads: Vogue x Amazon Fashion” was launched. The digital storefront looks more like Amazon than Vogue. The layouts could have been more compelling. Most of the high-end designer offerings don’t look any more appealing or pricey than many of the inexpensive unlabeled pieces for sale on this giant website. Bezos can assuredly afford to do a lot more. He is on target to become the world’s first trillionaire by 2026.

Why not resuscitate the Sears catalog modernized for today?

Many other things, including drive-in movies, drive-in concerts, are being revived! Meghan Markle is bringing back letter writing and the lost art of calligraphy. With all of us hunched over our computers 24/7, it is appealing to actually hold something “real” in your hands while sitting in a comfortable chair. It’s perfectly suited for couch potatoes and “armchair” fashion followers.

My suggestion is to hire 2020 design school grads and put their problem-solving skills to work. This group is well suited to meet the formidable challenges head-on. Also, collaborate with well-known fashion designers. It’s all about collaboration, community, and thinking out of the box. Virgil Abloh emphasized this point during Vogue Global Conversations, “The Future of E-Commerce,” on April 16th. The designer called for the industry to become a coalition.

The classifications of apparel in this new catalog are practical and versatile basics predicated on work clothes and uniforms: the sort of things was always in the Sears catalog. There should also be great knitwear, distinctive, protective outerwear, athleisure, accessories, footwear, and items for the home. The selection should not be limited to accessible price points only, although that’s an excellent place to start.

As I read about Sears’ history and looked through images of vintage Sears catalogs, I became even more convinced that this idea has potential. Sears, Roebuck, and Company changed the landscape of retailing and made shopping a national pastime. Sears started as a mail-order watch company in the late 19th century. Their “swollen, jam-packed catalogs” advertised everything from underwear to entire house kits. Around the holidays, families across the country would circle items in its legendary “Wish Book.”

The Sears catalog was “The mother of all catalogs.”

Many famous Americans decorated the pages. Several aspiring actresses got their start modeling in the catalog, including silent film star Gloria Swanson, Susan Hayward, and Lauren Bacall. Cheryl Tiegs jump-started her modeling career there. By the early 20th century, the Sears catalog had become entwined with the American psyche that the government began to use it for propaganda at home and abroad.

In the 1980’s Sears was at its peak as the nation’s largest retailer. By the 1990s, they began to struggle as the company faced competition from rival discount department stores like Kmart, Target, and Walmart, economic woes brought on by the Great Recession and the increasing dominance of e-commerce.

When Edward A Brennan and his board pulled the Sears catalog plugin 1993, it ended a storied era of mail-order bargain-hunting and wish fulfillment that had begun nearly a century earlier. Sears Tower sold in 1994, and the following year, Amazon.com shipped its first book. And as they say, the rest is history!