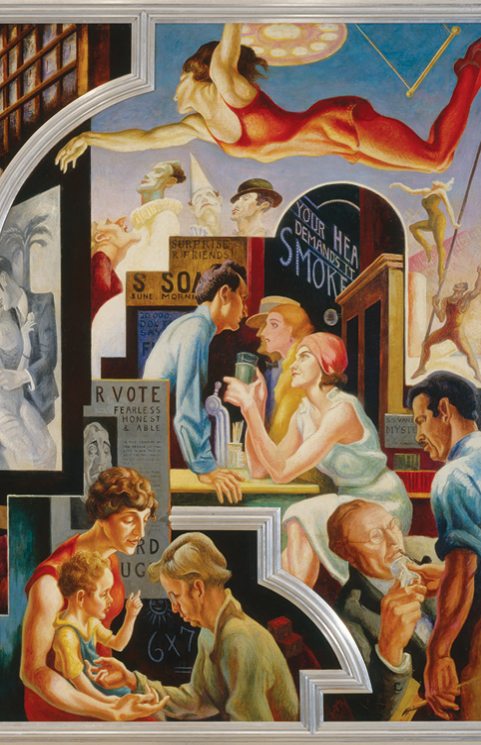 “America Today,” a stirring mural offering a unique view of American life in the 1920s by iconic artist Thomas Hart Benton is currently on exhibit at the Metropolitan Museum of Art on the Upper East Side.

The multi-panel installation juxtaposes images of hard-working blue collar workers in the rural United States against the gay and opulent lifestyle of the more fortunate residents of upscale Urban America.

The Missouri-born Benton who passed away in 1975 painted the 10-panel mural between 1930 and 1931 for New York’s New School for Social Research to adorn the boardroom of its modernist building on West 12th Street.

Benton was known for his realism and often politically charged creations. He became identified with the “Regionalist” style of the period, but later his refusal to adapt the trending styles of the times caused him to lose favor in the art world.

When he turned his focus to New York City, the artist’s work seemed calmer and less critical.

His piece, “Washington Square Art Fair,” offers a happy and idyllic glimpse at this Greenwich Village setting from a bygone era.

The piece hangs in the home of renowned New York developer Elie HIrschfeld who is a noted art collector and feels a particular connection to this painting.

“This was the first significant piece of art I acquired some 35 years ago,” Hirschfeld says. “I knew immediately that it would become the focus of my future collection of original art scenes of New York City.”

Hirschfeld says the piece offers a time capsule of the time when the park was a welcome respite for New Yorkers.

“The scene depicts a very happy Washington Square Park and the school that I attended – New York University Law School – and an important Art Fair that was well known at that time and lasted for many years,” says Hirschfeld.

“The style is prototypical Benton. It is Benton’s New York with a care free and relaxed presentation,” the collector adds.

“This is not the gritty and frenetic New York seen in so many artists’ work.”