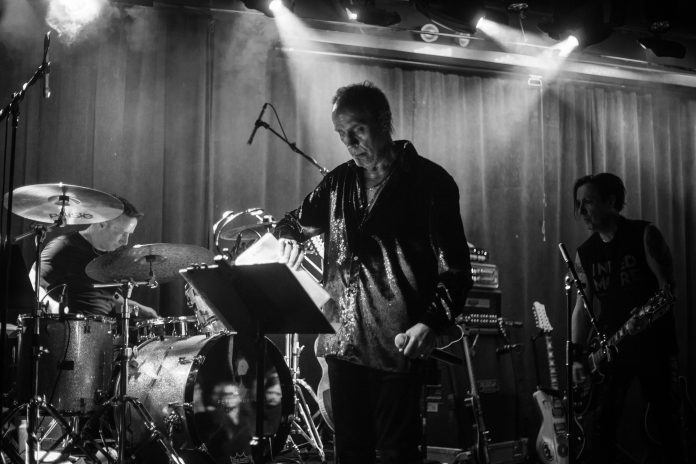 Peter Murphy has been through an immense ordeal since his last appearance at Le Poisson Rouge. During the month of August, Murphy played a highly-acclaimed series of intimate residency shows at the venue. Downtown covered two of the shows, including the final performance of his album Ninth.

The following night, those queued in the sweltering West Village for the Bauhaus show were informed that Murphy was unwell and unable to perform. Band members filed out one by one. He hadn’t sounded well the night before; his voice was raspy and breathless – perhaps he simply needed a night for some hot tea and rest.

It was much worse than that. During the Ninth performance, Murphy was teetering on the literal precipice of death, having unknowingly suffered a massive heart attack during sound check. The resulting burst of adrenaline coursing through his body allowed him to perform the entirety of the show.

Later, Murphy was whisked from his hotel to Lenox Hill Hospital for an emergency angioplasty and two stents.

“I could have died at any moment during that show,” he told Billboard in a recent interview.

He took several months to recover, regain perspective, and repair rifts with his former Bauhaus bandmates.

This week, Peter Murphy makes his return to LPR, as promised, wonky ticker be damned.

Murphy is a determined performer; he deeply values his audience, makes meaningful connections on stage, and lavishes salty affection. This was, however, a difficult show to witness. Despite his protestations, his health remains a concern.

Murphy’s legendary baritone has softened with his recent battles of the body, and the physical taxation of singing was evident in this performance. Bauhaus songs might have been a bit ambitious at the moment. The raw energy of Bauhaus relies on his wild barks and yelps, and with those mellowed, the energy shifted to the instrumentation of the band. Murphy made great strides to connect with the audience in more immediate ways, as well as the usual grousing about sound levels. “It’s not MY fucking fault,” he sassed at a heckler who complained about his microphone being too quiet.

He paced the stage in a gloriously ethereal sparkly shirt and bejeweled hands, gracing eager, reaching fingers with his presence and then stealthily ducking back into the fog; a wandering spirit shed of the stalking panther restlessness of his usual stage antics. Thankfully, he knew his limits, and vetoed a couple of numbers on the list…including Spirit.

“Oh, yes, that IS a lovely song, isn’t it?” he replied tersely, denying their request and instead launching into a rollicking, if cautious, Bela Lugosi’s Dead. Ç’est la vie! A lowered spot illuminated Murphy into a ghoulish floating head, the effect eerie and haunting. “Undead, undead, undead,” he howled in an unearthly moan. Poor Bela.

The band was tight, with guitarist Mark Thwaite, bassist Emilio “Zef” China and drummer Marc Slutsky returning to the stage with a set full of Bauhaus classics.

The shining moment of the show was his passionate rendition of All We Ever Wanted Was Everything. “It’s a fucking good song, innit? Daniel Ash wrote the lyrics and I wrote the music.” He discussed its meaning to the band and how it represented an escape from a working-class factory town; not the kind of place to nurture a young artist.

Although this lion in winter might still need a bit more recovery time before attacking the stage again, it was truly good to see Peter Murphy perform live once more and in such good spirits. We wish him continued good health and beautiful artistry.