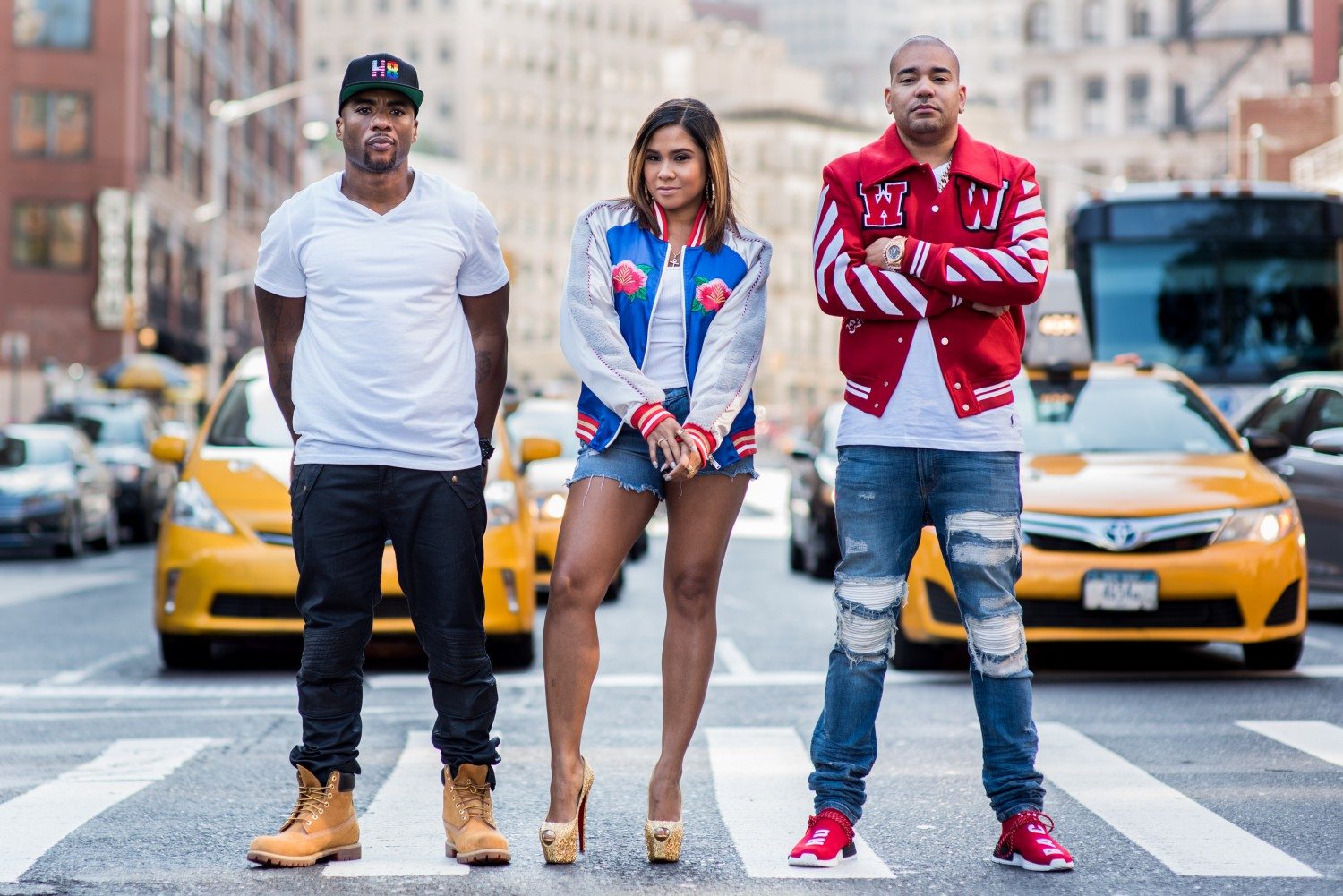 Known for the being the source of “New York’s Hip-Hop and R&B,” Power 105.1 FM is a Tribeca-based radio station with millions of listeners. Power 105.1’s morning show, The Breakfast Club, is arguably the flagship show of the station, as called the #1 radio program in the nation by The Source. The Breakfast Club is currently syndicated to more than a dozen markets — as segments like “The Rumor Report,” “Ask Yee” and “Tell Em Why You Mad” have a major nationwide following — while a countdown show, Weekends With The Breakfast Club, is heard in dozens of markets outside of New York.

The hosts of The Breakfast Club are the trio of DJ Envy, Angela Yee and Charlamagne Tha God. DJ Envy is the host of MTV2’s Sucker Free and The Week In Jams. Angela has been seen on the VH1 series The Gossip Game and the aforementioned Sucker Free; she has also been active as a manager, having worked with GZA and Jay Electronica. Charlamagne is the co-host of MTV2’s Guy Code and Uncommon Sense.

DJ Envy, Angela and Charlamagne spoke to Downtown about a variety of topics, including the Powerhouse 2016 concert, which comes to the Barclays Center on Oct. 27. This year’s event features a mix of major stars and up-and-comers. Surprise guests aside, attendees can expect to see Usher, Wiz Khalifa, Bryson Tiller, Fat Joe, Remy Ma, Desiigner, Young M.A and Tory Lanez.

What do you wish more people knew about Power 105.1 FM?

Angela Yee: That we’re like a family up here. A lot of the people that work here have known each other for years. So it was great for everybody to come together under one umbrella, and even when we have our meetings, it’s like having a family reunion once a month.

DJ Envy: I was living in New York when that was happening, but I definitely don’t remember it.

Charlamagne: I definitely wasn’t living here. I was living in South Carolina. I didn’t know what the hell a “Power 105.1” was.

Who are you most excited to see perform at this year’s Power 105.1 Powerhouse Concert?

Angela Yee: Usher! He always puts on a great performance, we saw him at the iHeartRadio Music Festival and he is super-experienced with his dance moves. I’m also excited to see at Power 105.1’s Powerhouse Concert Young M.A and Desiigner because they are both from Brooklyn. I know there’s going to be a lot of special guests in the building so I’m excited for that. We can’t reveal those surprises right now but I promise you’ll be blown away.

Charlamagne: Yeah, after seeing Usher at iHeart, I would say I’m looking forward to seeing Usher on the Barclays stage.

DJ Envy: I wanna see Tory Lanez. He likes to climb and be Spiderman in buildings so I wanna see what he’s able to do. And also Young M.A because it’s her hometown in Brooklyn.

Angela Yee: Yeah, Young M.A and Desiigner are both from Brooklyn so that’s a big deal. I know there’s gonna be a lot of special guests in the building for the Power 105.1 Powerhouse Concert! We can’t reveal those surprises right now but I promise you, you’ll be blown away.

Charlamagne: I wanna see how real Young M.A.’s buzz is. I know it’s real, I just wanna see HOW real.

DJ Envy: And I heard Young M.A is bringing out some special guests. That’s gonna be dope.

A lot of people will just see you on-stage for a few minutes at the concert. But what does your schedule during Powerhouse look like? Are you able to enjoy much of the event?

Angela Yee: Woo! Well I have a pre-event beforehand, then I have to come here to get my hair and make-up done. I’ts a full day of activities. We have to make sure we look good because we do interviews backstage and since we’re live on the air, we never know when an artist is gonna come through to chat it up. We don’t get to see much of the Powerhouse show because we are being pulled in a hundred different directions, talking to different people from labels, talking to a lot of artists and talking to each other. It’s very busy.

What was the first concert you ever attended into New York City?

Angela Yee: Mine might have been a New Edition reunion concert at Madison Square Garden.

Charlamagne: New York City? I think it was Erykah Badu and Maxwell together. I don’t remember. I like to cha cha.

When not busy with Power 105, how do you like to spend your free time?

Angela Yee: Well we just opened a juice bar in Brooklyn. So all my spare time now is dedicated to making sure the business goes smoothly, because it does interest me to learn how to get that aspect of work done, like opening a brand new business from the bottom up and just training people, hiring…All of that is a great experience for me for things that I wanna do later on in life as an entrepreneur.

Charlamagne: Yeah me, I like being a husband, a father and a tweeter.

DJ Envy: Me? With my family. I got five kids and I like spending time with my kids. Watching them play football, all types of recitals or just get some sleep.

Angela Yee: I have a thousand favorite restaurants, you know I am the Queen of going out! If I’m in Brooklyn, I’ll go to Footprints, Mango Seed, Suede or Sugar Cane. I could name a thousand places. I also like Vandal for the ambience.

DJ Envy: It depends on what type of food. I’ll go to Del Frisco’s for the steak, but I like TOA’s for the Chilean Sea Bass.

Charlamagne: My favorite album of 2016 is by far The Life Of Pablo by Kanye West. I’m still listening to that album right now, I think it came out in like February and it still has a lot of replay value for me.

DJ Envy: I would have to agree. Life Of Pablo album, that Kanye West album is dope.

Angela Yee: I like Solange’s album. I’ve been really grooving to that and enjoying it.

Charlamagne: I love Solange’s album too.

Angela Yee: You can be anything you want to be in life if you work hard. Nothing beats hard work.