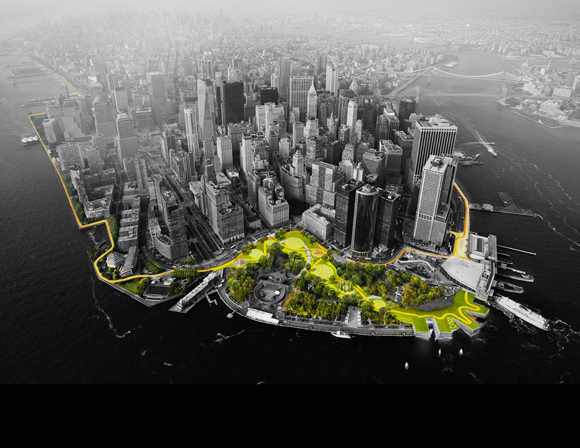 The past year has proven that Lower Manhattan was able to bounce back from the destruction of Superstorm Sandy, despite speculation it would not be able to recover. Moving forward, the Big U project will ensure Manhattan is guarded against storms, like Sandy, that could potentially threaten the island. The United States Department of Housing and Urban Development and the Presidential Hurricane Sandy Rebuilding Task Force started Rebuild by Design. Rebuild by Design was a competition that provided a platform for engineers and architects, along with other developers from around the world to submit eco-friendly and economically responsible designs to defend areas from future storm damage.

Recently, “The Big U” was announced as the winner for the Lower Manhattan portion of the competition. “The Big U” was co-developed by Danish BIG, an organization of architects, designers and developers, and Dutch One Architecture. $335 million will be put toward the building of this Lower Manhattan storm defense system along the shoreline. The project will address low-lying areas in the Lower East Side in hopes of mitigating the damage from flood water with barriers, in the wake of future storms.

Do not be alarmed Downtown denizens! The new complex, projected to wrap around the island down West 57th Street, around Battery Park, and up to East 42nd Street will not be an eye sore. Instead, the structure will be a public space with salt-tolerant fauna and areas for visitors to enjoy the view. BIG founder Bjarke Ingels calls it a “social infrastructure”, when describing his vision for the barrier. Initial renderings of the Big U show New Yorkers adapting to the edifice and using the space for relaxation and fun.

Tips For Kicks: Help Those In The Service Industry Directly Affected by COVID-19