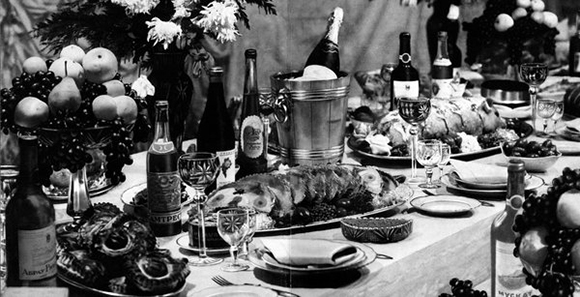 Anya von Bremzen, a James Beard Award winning food writer and author of the best-selling Mastering the Art of Soviet Cooking was the guest of honor at a panel discussion this week at The Lower East Side’s Tenement Museum.

The author was born in the Soviet Union and escaped with her mother from the clutches of famine and poverty when she was only 10, leaving behind the restrictions of the communist nation, but carrying with her the memories and the culinary secrets of her homeland. She has recorded all of these and more in her latest book, Mastering the Art of Soviet Cooking: A Memoir of Food and Longing.

The event began with comments from von Bremzen and her mother, Larisa Frumkin, regarding her motivation for writing the book, followed by a Q&A conducted by writer and performer Barry Yourgrau.

Von Bremzen and her mother each shared their contrasting experiences of living in the Soviet Union and their lives since they arrived in the United States in 1973, and offered a slideshow of their earlier lives behind The Iron Curtain.

In this memoir, the women bring us into their experience of sharing one kitchen and a bathroom with eighteen families; what it was like to wait in lines for hours for a loaf of bread and toilet paper. Also included is a prologue that offers a fascinating glimpse of their family history.

The book uniquely tells their history through a culinary perspective. Food had strong emotional and political meaning in the USSR, where many characteristic dishes were born in troubled times.  The goal for von Bremzen and Frumkin was to recreate those experiences through the recipes in their book, demonstrating the essence and the importance of those meals, as both a culinary and social experience during trying years.

This style of fusing personal experiences with cooking recipes has been labeled “Foodoir.” A prominent example of this style of writing is Julie Powell’s bestselling book, Julie and Julia, which was brought to the big screen in 2010.

This is Von Bremzens fifth book, and the first that deviates from her customary recipe cookbook style. She has also contributed as an editor to Travel + Leisure magazine and has won three James Beard Awards for her previous books.