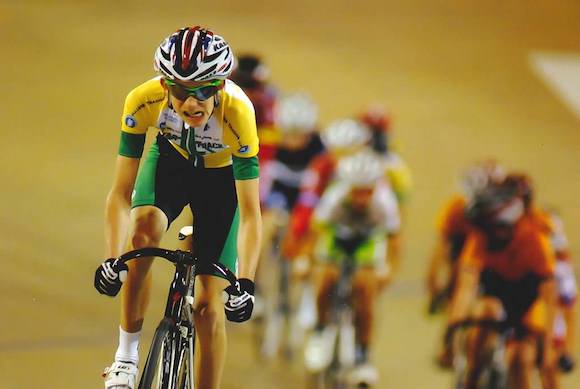 Physical and fearless, Billy has natural balance and loves sports like skiing and surfing. From his British born father – Peter, a handy DIY- motorcycle riding dad, Billy inherited his daring nature and love of bikes. But, like many children, Billy is learning disabled, which is challenging at the best in times. In the classroom Billy is often frustrated and inward.

By the age of nine, Billy’s learning hit an all time low. This began to interfere with his self-confidence and started to create anxiety concerns for himself and his parents. During this time, a family friend from England and dedicated cyclist came to visit New York. Watching Adam win races in Central Park captivated Billy. Adam agreed to take Billy out for a casual ride and discovered his effortless cycling talent and startling stamina. By the time he was 10 years old, Billy could effortlessly cycle to and from the George Washington Bridge from downtown Manhattan.

Eventually at a local race, The Taylors uncovered a youth cycling program called Star Track, which educates kids in the principles of bicycle riding, track racing, teamwork and physical and psychological development.

At Star Track, Billy flourished. As his speed and control improved, his desire to ride and dedication became relentless. Billy wants nothing but to ride all the time. Anywhere.

As his cycling skills have improved, he has been empowered on many other levels – for the first time in his life the playing field has been leveled. With his newly found confidence he has overcome his shyness and now participates in many different activities.

Billy often races against adults. To date, he has competed in two New York state championships and well as the US Junior Track Nationals in Los Angeles where as the youngest in his age group, managed to place 7th overall.

Cycling is now a family affair. During cycling season, Billy rides at Kissena Velodrome 3-4 times a week plus another day road training. Peter has become his co-trainer, mechanic and chauffeur. During the summer months, training continues in the UK in London or Manchester. Caroline, his 9 year old sister has also begun to cycle at Star Track.

Wise beyond his years, Billy would love to coach kids later in life. With his growing ability, he may be destined to go beyond coaching. At 12 years old, Billy has found his passion. Hudson Square a Gateway to the Future