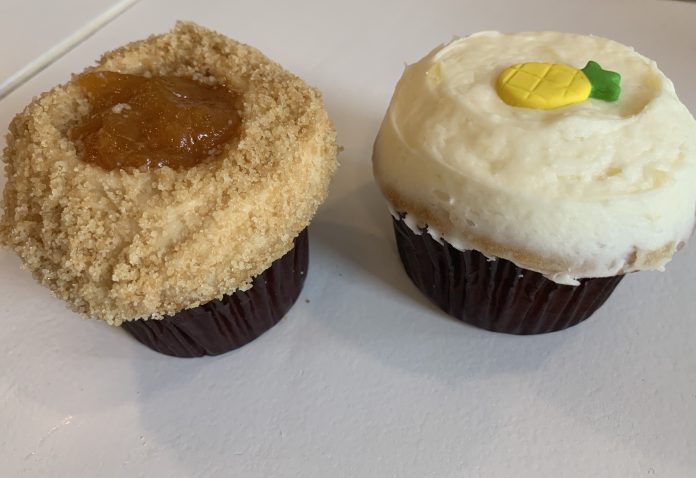 Sprinkles Cupcakes, the world’s first cupcake bakery, is kicking off the summer with the temporary launch of some sweet new flavors. They are introducing a brand new cupcake–peach pie–which has a brown sugar buttercream frosting, a buttery pie crust crumble, and a rich brown sugar crumb cake topped off with cinnamon spiced peaches for gooey greatness. They’re also re-releasing last summer’s favorite cupcake–the pineapple-upside-down cake–filled with caramelized pineapples and finished with a pineapple buttercream frosting for just the right taste.

Aside from the summer flavors, Sprinkles offers over 20 cupcakes flavors, which include vegan and gluten-free options that all have their signature “modern dot” on top of the cupcakes. Other than cupcakes, the bakery provides many different desserts, including cookies, ice cream, layered cakes, and brownies. The new summer flavors are available at all Sprinkles locations for the month of June.

Sprinkles began as the world’s first cupcake bakery back in 2005. The bakery first opened in Beverly Hills by founders, Candace Nelson and her husband, Charles Nelson. Charles and Candace have been working together from the beginning, ever since Candace would sell cakes from their home.

When Charles and Candace were beginning the foundation of Sprinkles, there was a lot of competition involved, so they knew they had to do something that would make them more unique. Together they decided to introduce a simple and easy-to-use cupcake ATM back in 2012.

The ATM came about when Candace was pregnant with her second son and had a serious late-night cupcake craving. Since stores were closed and it was late hours of the night, she wasn’t able to get a cupcake, so Charles came up with the idea of the cupcake ATM.

The ATM doesn’t make the cupcakes. It holds up to 400-800 individually boxed cupcakes. A robot arm moves inside the ATM, delivering the cupcakes gently out the window for the customer. This ATM allows customers to enjoy fresh baked cookies and cupcakes for 24/7 service in 15 different locations.

Candace has worked to become the author of the book, “The Sprinkles Baking Book: 100 Secret Recipes from Candace’s Kitchen,” a judge on two Netflix baking shows, opened a pizza restaurant in Brentwood, California, and mother of two boys has worked hard to build Sprinkles. She pushed through many obstacles like finding a landlord who would even begin to believe in the potential for their store but was determined to bring the store together.

Candace has always had the heart of a baker since her great grandmother used to bake desserts in her San Francisco restaurant back in the 1930s. While Candace surrounds her life with sweet tastes and cupcakes, she strives to continue her great grandmother’s legacy of creating these simple, homemade recipes from scratch at Sprinkles.

The peach pie and the pineapple up-side-down cupcakes are some of the homemade and straightforward indulgences that Candace and her husband provide to give their customers a tasty variety for those cravings.

A Southern Italian Eatery in Union Square Raises the Bar