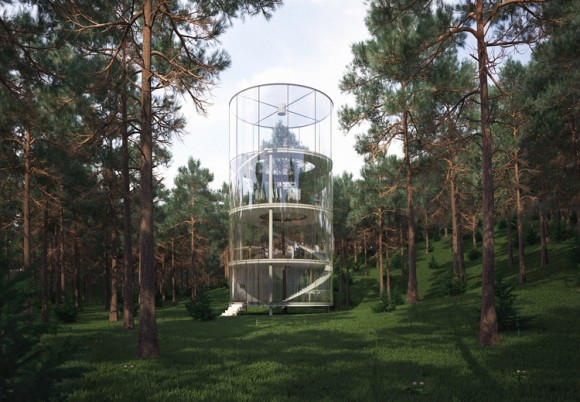 As our everyday life becomes more and more chaotic, we long for a place to relax; a place “that can develop your spiritual and creative development.” Aibek Almasov, a talented and innovative architect, has built this much-needed haven, which he calls his Tree in the House. His creation goes beyond imagination, and has attracted spectators from around the world. Tree in the House is located in the quiet, cosy forest of Almaty, Kazakhstan. Its main features include transparent glass walls, a spiral staircase, and a live fir tree, which springs from the center of the floor. This project is one of Almasov’s favorites, though he admits that the idea did not come to him immediately. He explains that the concept took roughly a month to conceive; every detail was considered as he attempted to imagine what kind of house he himself would’ve liked. At first, Almasov imagined the house with two trees in a glass cube, but he considered the cubic design to be too easy. His final plan took longer to complete, but Almasov feels it was worth it. Tree in the House has been tremendously successful, attracting worldwide attention. In fact, China’s tourism is interested in ordering a few of the architect’s projects, including the Tree in the House. In the meantime, Almasov is working on designing a showroom for Mercedes-Benz, in Kazakhstan. And if it’s anything like his previous projects, it’ll be quite spectacular.