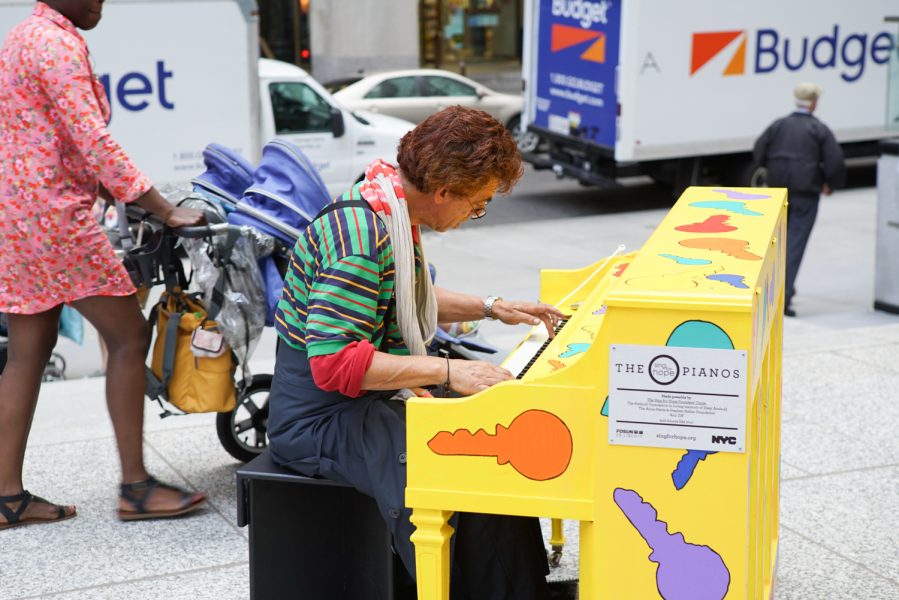 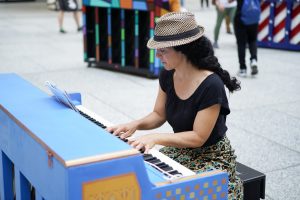 This summer, residents of all five boroughs will have their chance to tickle the ivories in public spaces and parks.

Sing for Hope, a non-profit that works to extend the arts and music to those who need it most, is bringing 60 Sing for Hope Pianos to the city of New York this summer. The pianos will be placed in public parks and other high-traffic public spaces across all five boroughs for anyone to play. For a complete list of piano locations, see this map.

This year’s pianos were designed by artists such as Kate McKinnon, Billy the Artist, Roberta Flack, among others, and Broadway casts of shows including “Beautiful,” “School of Rock,” “Waitress,” “Cats,” “Chicago” and “Aladdin.” The piano installation will be on display until June 25, at which time 50 of the pianos will take up new and permanent residences at New York City Schools. 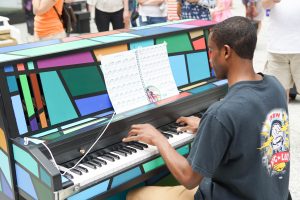 Today the pianos were unveiled at 28 Liberty Plaza, where 10 of the pianos will remain during the three-week installment. Passersby who witnessed the unveiling were treated to pop-up performances from Sing for Hope artists throughout the day. Others tried out the keys for themselves, many playing from memory and some playing the provided sheet music that was attached to each piano with a chord. Selections included everything from Beethoven’s “Für Elise” and Joplin’s “The Entertainer.”

Fosun Group donated a floor of 28 Liberty, the recognizable building in Downtown Manhattan, as a creative space for the artists who designed the pianos.

“It is an honor to support Sing for Hope for a second year, as it fulfills its mission to provide arts resources and programming to underserved neighborhoods in New York City,” said Bo Wei, the chief executive representative of the Fosun Group in the U.S., in a press release. “We are thrilled to be able to provide the space that enables these pianos to come to life and our collaboration with Sing for Hope ensures that 28 Liberty will continue to play a vital role in the culture of Lower Manhattan.” 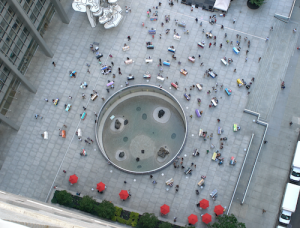 Performances will be popping up at piano sites over the next few weeks. Last year, Sing for Hope Pianos were delivered to schools, benefitting an estimated 15,000 students and with each arrival including a ribbon-cutting ceremony.

“We started Sing for Hope with core belief that the arts should be accessible to all,” they said. “Now, more than ever, we believe that the arts can truly transform and uplift not only individuals but entire communities.”

Photos courtesy of Sing for Hope