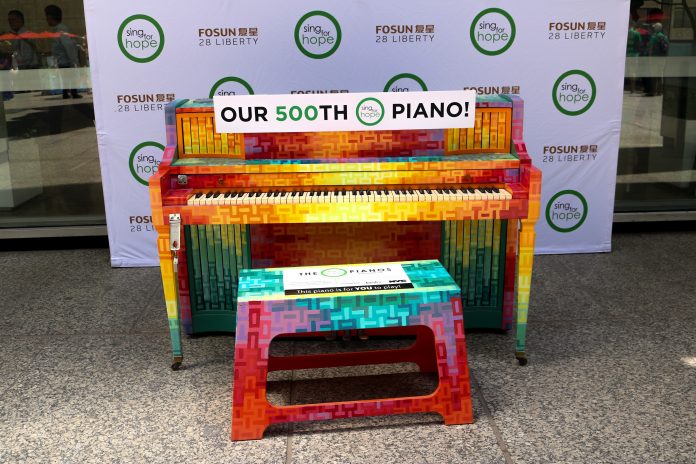 Whether you’re eager to play the piano or digital piano in front of a live audience or looking to admire originally-designed artwork, the Sing for Hope Pianos project returns to the streets of New York City for its eighth consecutive year.

From June 4th to the 23rd, Sing for Hope will display 50 artist-designed pianos in parks and other public spaces across the five boroughs for any passerby to walk up and play a tune. The piano designs are vibrant, striking expressions of the creativity found within the city, featuring designs like the New York City skyline, an underwater theme, and pride-colored stripes. The non-profit organization founded in 2006 by opera singers Monica Yunus and Camille Zamora celebrates as they unveil their 500th Sing for Hope Piano this year.

Sing for Hope was built upon the foundation of being a resource for New York artists to use their art to give back to the community, and they continue to abide by their roots. This year’s masterpieces were created by a wide range of artists, including the Broadway casts of Mean Girls, Dear Evan Hansen, and Jersey Boys; along with prominent visual artists around the world, including artist/designer Alpana “Tejaswini,” Florida-based educator Bridget Wendt, Staten Island-based family of artists Rob, Peggy and Megan Padovano, and many others.

The Sing for Hope Pianos project is made possible in partnerships with New York City Parks and Recreation, New York City Department of Education, the Office of the Mayor, the Mayor’s Office of Media and Entertainment, with additional support from Fosun International. This year, the pianos will be distributed in high-traffic locations included Virginia Park and Van Cortlandt House Museum, Brooklyn Bridge Park: Pier 6, Coney Island Boardwalk, Tompkins Square Park, Central Park, Unisphere Flushing Meadows, Midland Beach, and many more.

Once the Sing for Hope Pianos project is over, the pianos will find permanent homes in NYC public schools starting this fall. This initiative will extend the outreach of educational programs to over 100,000 NYC students and community member annually.

Earlier today, Downtown Magazine had the opportunity to attend the official unveiling of the 2019 Sing for Hope Pianos event at Fosun Plaza on 28 Liberty in NYC.