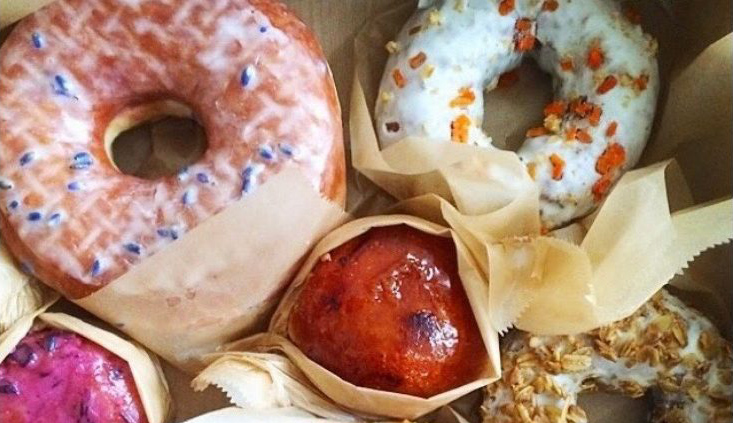 Today marks the second sweetest day of the year! November 5th is the second National Doughnut Day (yes, Doughnut Day is just that amazing) and we’ve rounded up the most delicious doughnuts in New York City in celebration of these sweet treats.

A doughnut (British English) or donut is a type of fried dough confection or dessert food. The doughnut is popular in many countries and prepared in various forms as a sweet snack that can be homemade or purchased in bakeries, supermarkets, food stalls, and franchised specialty vendors. Doughnuts are usually deep-fried from a flour dough, and typically either ring-shaped or a number of shapes without a hole, and often filled, but can also be ball-shaped (“doughnut holes”). Other types of batters can also be used. Various toppings and flavorings are used for different types, such as sugar, chocolate, or maple glazing. Doughnuts may also include water, leavening, eggs, milk, sugar, oil, shortening, and natural or artificial flavors.

Trust us, you do-nut want to miss out on these not-so-average donuts.

IT ALL STARTED WITH A DOUGHNUT – The Doughnut Project

What began as mad science meets culinary venture is now known as The Doughnut Project. In a world that is stuffed to the gills with sweet shops and fad foods, we want to go beyond sprinkles and cream cheese frosting. We like to amp things up with fresh, seasonal ingredients and a menu that beckons you to ask, all that’s on a doughnut? To which we reply, yes, it certainly IS all on a doughnut.

Choose between donuts and bagels, never when you can have both? The Everything Donuts Sampler from Flex Mussels is a breakfast lovers dream. The sampler consists of fried balls of dough, covered with everything seasoning and stuffed with scallion, jalapeño cheddar, maple bacon, and smoked salmon fillings.

One of the Classics – Doughnut Plant

In 2000, Doughnut Plant opened its first storefront on Grand Street in the Lower East Side. The passion for originality pours out into every detail of our shops, too. Every detail has a story here. The colorful doughnut tiles were made by Mark’s potter father, Marvin. The mirrored bathroom with a disco ball was inspired by Studio 54, one of Mark’s first jobs in NYC.

The Famous Doughnut Grilled Cheese, a fresh glazed doughnut sliced and filled with mozzarella cheese, is served piping hot over a bowl of tomato soup. The sweet, yet savory doughnut sandwich hangs on a banana stand, allowing the cheese to drip and ooze out into the hot soup.

Opening its doors on a cold and blustery December morning in 1964, the Donut Pub has come to represent New York City at its very best, brightest and most delicious. Whether it’s our out-of-this-world red velvet donuts or our black and white cookies the Donut Pub has something for everyone.

Bite-sized, ricotta-based, salted caramel doughnuts are topped off with a house made caramel sauce for the perfect amount of sweetness.

Gluten Free, no PROBLEM, Senza is 100 % GF Certified. They are aware that being celiac or choosing a gluten-free diet can sometimes be challenging, especially when dining out. At Senza Gluten they want to make sure your dining experience is perfect and safe by guaranteeing a 100% gluten-free cuisine and bakery.

Don’t worry if you just happen to miss today’s delicious sweet treat, because there is another National Doughnut Day the first Friday in June!