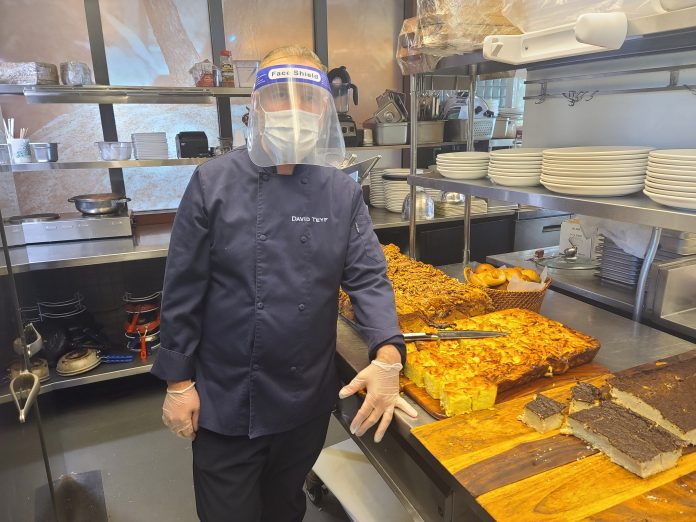 Holocaust survivors are considered some of the most vulnerable New Yorkers amid the COVID-19 pandemic.

One Manhattan restaurateur is making sure they get a dose of comfort – and good food – while staying indoors to remain safe.

Madison and Park Hospitality Group’s David Teyf, the executive chef who operates Lox at Cafe Bergson at the Museum of Jewish Heritage – A Living Memorial to the Holocaust, is preparing pre-packaged kosher meals for Holocaust survivors.

With a small team, Teyf then bring the meals directly to these seniors across New York City.

“I am personally cooking and delivering these meals. I know that my grandparents, who were Holocaust survivors, are smiling down on me. This is something I want to do to honor them and because it’s the right thing to do,” Teyf says. “It’s in my soul to give back.”

An estimated 38,000 Holocaust survivors live in the greater New York City metropolitan area, according to Selfhelp Community Services. More than 50% of them live in poverty.

The pandemic is particularly traumatizing, echoing their lives more than 75 years ago during the Holocaust when food and resources were scarce. Because of coronavirus restrictions, they struggle with a lack of resources and community as they isolate at home.

Teyf has partnered with the Museum and the Met Council to identify 50 Holocaust survivors who need assistance. Additionally, the Museum is reaching out to other survivors to assess their needs so Teyf can provide more support.

He also is setting up an arrangement to deliver more kosher meals to essential healthcare workers at hospitals throughout New York City. The meals include salads, entrees, and desserts.

Teyf’s family has more than a century of epicurean experience.

“My great-grandfather started baking matzah for the Jewish community in Minsk in 1920,” he says. Each of his grandparents was the sole family survivor of the Holocaust. “After the Holocaust, my grandfather continued his father’s tradition of baking matzah for the Jewish community, which he had ultimately risked his life during Communist times until 1979. In 1979, my grandfather decided to pick the whole family up and leave Minsk for the United States for our Jewish freedom.”

“David is doing a real mitzvah,” Kliger says. “The Met Council and David are being generous with their hearts and minds: stepping up to serve others when there is a great need in our city.”