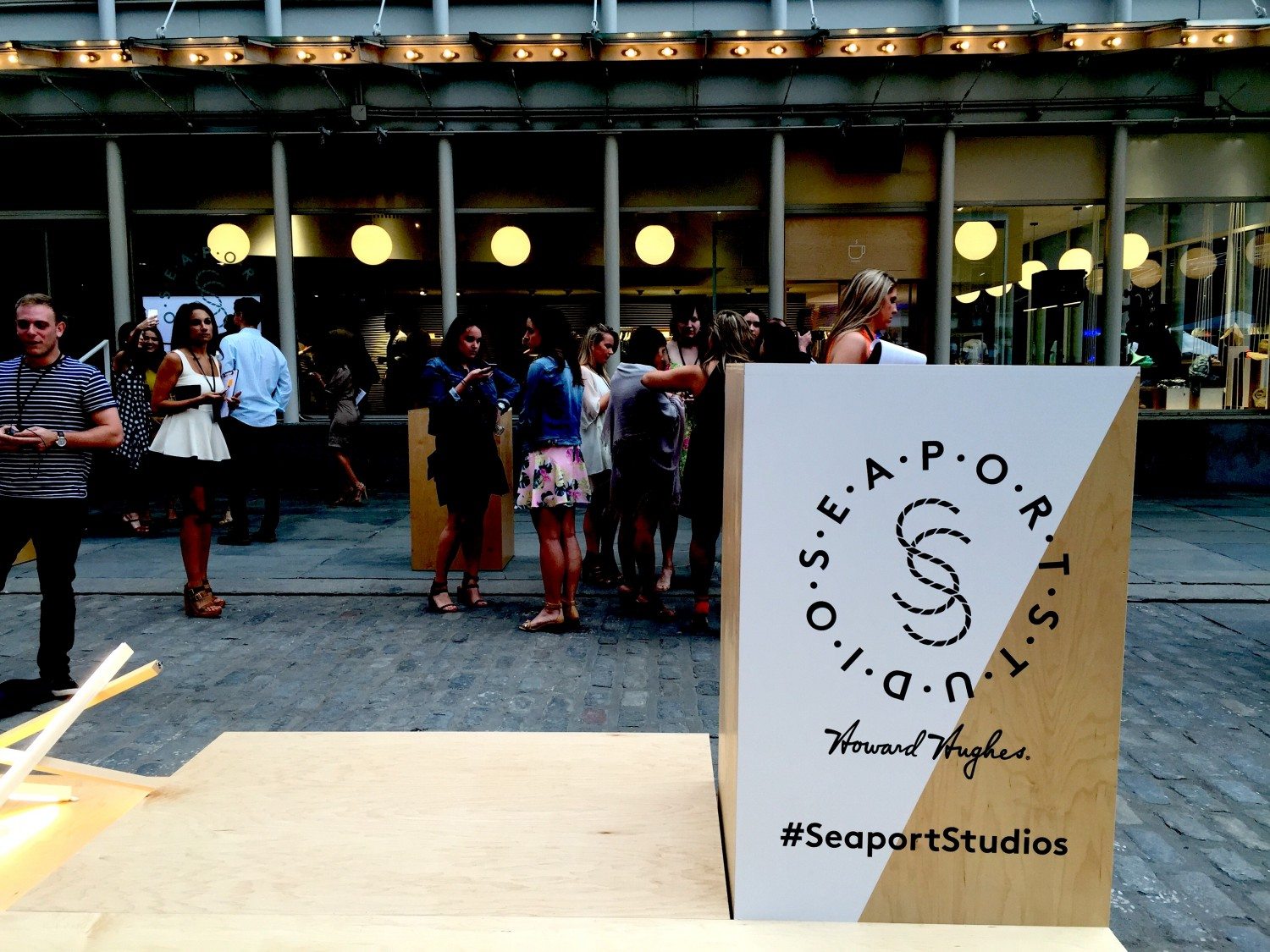 On Wednesday June 17 , the Seaport Studios located at 19 Fulton St. down on the South Street Seaport had its VIP launch party

This exuberant, and posh commencement of the modern and chic Seaport Studios gave many NYC locals the opportunity to gather around and enjoy carefully-crafted culinary art, as well as admire art and fashion from talented local artists.

For those of you who don’t know but should, the Seaport Studios is [the] concept for New York’s finest emerging designers and artists to showcase their talent. The visionaries of the new Seaport Studios are from the Howard Hughes Corporation (HHC). Their intention is to recognize the district for its unique selection of entertainment, food, and fashion.

While the Seaport Studios is also partnered with WWD, a famous world-renowned fashion brand, they want to gather a group of independent brands that represent the highest standards of contemporary style and bring them to the most historic and timeless area in lower Manhattan.

Eleanor Edelman, Co-Founder and Creative Director of Prospect Creative in Manhattan says, “We were approached by the Seaport Studios team in April to take over the fine art aspect of the space for a total of five exhibitions over a nine month period.”

In terms of the event, Edelman could not have been happier. “Putting together the exhibitions for the first takeover has been a serious labor of love for my business partner and I to see it all come together, the evening was really magical,” Edelman stated.

The first takeover for the Seaport Studios includes exhibitions by Baja East: Apparel, Baron Von Fancy: Art, Esmeralda Kosmatopoulos: Art, Finell: Lifestyle, Glass: Swimwear, Jennifer Fisher: Accessories, Manebi: Shoes, Rochambeau: Apparel, Shantell Martin: Art, Union Surfboards: Lifestyle, and Via Quadronno: Cuisine. However Edelman and the company finalized three artists for their launch takeover: Esmeralda Kosmatopoulos, Shantell Martin, and Baron von Fancy.  Edelman stated, “Their work is broad in its range of medium and audience, they share a fundamental language and symbolism that is a quiet nod to the appeal of the new Seaport District: a rebirth and reinvigoration of something we already innately know and love.”

While each artist was unique and incredibly talented in so many ways, one artist really stood out. Greek-French multi-disciplinary artist, Esmeralda Kosmatopoulos had conceptualized three large-scale neon works inspired by the history – both past and recent. It is exemplary and inspired by the true identity of the South Street Seaport. Together, these three new neon artworks are ‘connecting the dots,’ in an exhibition that probes the deeply complex relationship between tradition, cultural heritage, creativity and innovation in the digital age. Kosmatopoulos has nudged her modern audience to think outside the box and really be immersed within what she is really trying to do with her art. While the artist incorporates the striking simplicity of imagery and symbolism we associate with children’s games; a fundamental language that transcends cultures and geographical frontiers.She mixes the elements of traditional practice with bold elements of digital culture in order to present the viewer with a rare opportunity to reconsider the ways in which society learns, creates, and shares in a time where digital screens have surpassed paper. Her exhibition is spiraled around technological art creating her audience to think in a more artful and technologically savvy mind frame.

There will be five takeovers all together ranging from different dates. The first takeover for these exhibitions will be open to the public on June 19-July 27. Different takeovers will last all year long officially ending the fifth takeover on Jan. 29 of the year 2016.