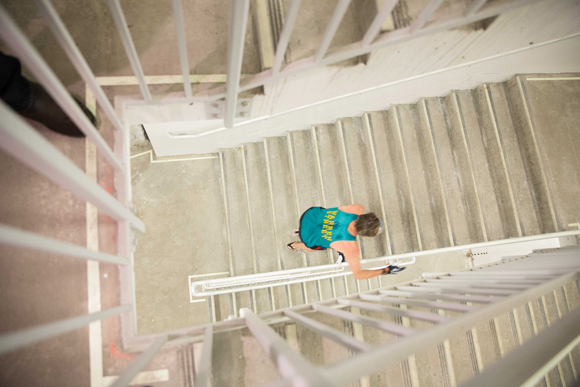 The 1,632 steps were symbolic, charitable, and historic.

More than 660 people from 15 states converged at 4 World Trade Center last night. They did last minute stretches, affixed bib numbers and took loads of selfies – staring up at the gleaming new building.

A short while later, with dozens of elite climbers at the helm, they began their sprint up to the top of the 72-story building. There were parents, coworkers, teenagers and senior citizens. Police officers and firefighters, including a number donning their heavy fire gear.

All climbed for cancer. Last night’s event was the first-ever stair climb at 4 World Trade Center, an endeavor to benefit the cancer research of young scientists funded by the Damon Runyon Cancer Research Foundation.

“We thank Silverstein Properties for partnering with us at this historic moment in time. 4 World Trade Center is a symbol of innovation and resilience, and was an appropriate venue to champion commitment to the cutting-edge researchers who are making the medical breakthroughs of tomorrow,” said Lorraine W. Egan, the Foundation’s President and Chief Executive Officer.

“All proceeds from Runyon Up will allow us to support the best and brightest young cancer researchers in the nation. Our participants help make life-saving discoveries.”

In total, more than 700 people – from those affected by cancer to professional stair climbers – took part in the stair climb. As of today, they’ve raised nearly $173,000, though fundraising continues until April 30th at runyonup.org. One hundred percent of all donations raised by participants will directly support young scientists pursuing cures for all forms of cancer.

The first to arrive at the top was Tim Donahue, 44, of Manhattan, who completed the climb in 8 minutes and 56 seconds. Hours later, after eight heats that took off about 10 minutes apart, the final arrivals were gear-adorned firefighters from the Clinton Rescue Company 455 from North Hunterdon, New Jersey.

Most of the climbers made it to the 72nd floor, where yellow-shirt-clad volunteers cheered them on, distributed medals and handed them bottles of water. Dripping with sweat, the climbers awaited their teammates, took more selfies and snapped photos of the amazing nighttime cityscape.

Among the group were more than a half dozen young scientists, who are funded by Damon Runyon. They greeted climbers, and thanked them for their support.

The event marked a pivotal point in the history of the World Trade Center site. In November, officials held a ribbon-cutting at 4 World Trade Center, which will soon be the sixth-tallest building in New York City and recently was named Curbed’s Building of the Year.

For most people, this was their first view inside the 2.3 million square foot building, which is not expected to see tenants – including the Port Authority of New York and New Jersey – until 2015.

Down on the 54th floor, the event took on a festive atmosphere, as those who accomplished the vertical feat were able to drink beer and nosh on snacks provided by sponsors, including Pepsi, Cabot Creamery, Dave’s Hoagies, GoGo squeeZ, GuS – Grown-up Soda, SkinnyPop Popcorn, Utz, Vita Coco, Vita Organic Foods, and Whole Foods.

Before many left, they approached a wall on the 54th floor, at which a number of the participants affixed messages in memory of those they’ve lost, or in honor of those currently fighting battles against cancer. It was a surreal moment, reflective of the poster-emblazoned walls outside of area hospitals after the September 11th attacks 13 years ago.

One thumbtacked to the corkboard read: “I climbed for those who can’t anymore.”