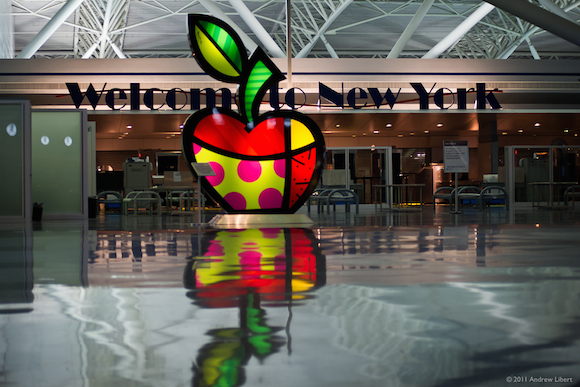 DOWNTOWN had the wonderful opportunity to sit down and talk with the talented and colorful artist, Romero Britto. Romero took the time to come downtown for a quick chat before his big night at the Friar’s Foundation Gala. The Friar’s Foundation Gala is very well-known, but this year was even more special because Romero designed the Entertainment Icon award given to Robert DeNiro. The brightly colored award, a staple of his work, was a sculpture of two children holding hands, heavily influenced by his large involvement in the Childhood Foundation.

Romero Britto’s internationally known artwork has been featured in dozens of collaborations. A myriad of companies and brands have reached out to the multi-talented and vibrant artist in hopes of a custom piece. Among the fortunate companies to have a piece created especially for them by Britto are Bentley, Mattel (especially notable as he was the first living artist to create a Barbie), FIFA, Hublot, Technomarine, Coca-Cola, Mini Cooper and the JFK airport among many others.

The Brazilian artist, painter, and sculptor has been painting since the age of eight. Having curated special pieces for even Queen Elizabeth herself, Britto combines cubism and pop in his unique style which has been debuted in over 100 galleries and museums all over the world.

The neo-pop artist, now residing in Miami, Florida is constantly keeping busy at his Wynwood studio creating new pieces on a daily basis with upcoming exhibitions in Germany and France this year. You can hop on a plane and watch as Romero Britto continues to amaze us with his jubilant work!