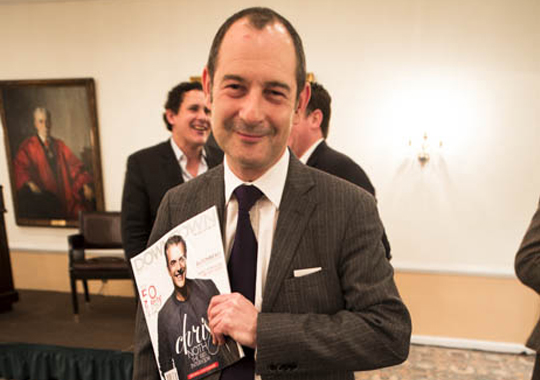 If you put together some of the greatest PR, Marketing and Advertising publicists of New York City in the same room, there’s only one way you could make them stop talking over each other.

Put them in the same room with Rob Norman the Chief Digital Officer of GroupM Global—one of the world’s largest buyer of online media with more than $5 billion billings—and you’ll get their immediate attention, and silence.

This is exactly what happened last Friday at the International Advertising Association NY Chapter Luncheon series event at the Princeton Club.

The can’t-miss exclusive luncheon, titled, “Making Friends and Influencing People. Has Social Media Eaten Advertising?” was sponsored by Sports Illustrated and was attended by media from The BBC, The New Yorker, The Financial Times, TIME, National Geographic, and of course, DOWNTOWN Magazine. The event began with cocktails and conversation which was followed by lunch and finally, the interview. “Digital marketers should focus on the behaviors that led to the click, than the click attribution,” Norman said.

Norman’s comments were  as clever as it was inspiring. People who work on Social Media live an intense up and down romances with Social Networks and  Norman plays the perfect couples therapist.

This Luncheon event was just the first one of many planned by the IAANY in the coming weeks including, a  Young Professional Workshop on April 15th, with Bruce Brandfon of North America Puclicitas, and the 2014 Global Marketing Summit on April 24th, with panelists such as Susan Hammes of American Express, and Ben Jankowski of Mastercard. The theme will be, “Finding the right balance between man, money, media and machine.”

You can see the whole schedule and register to up-coming events by clicking here.