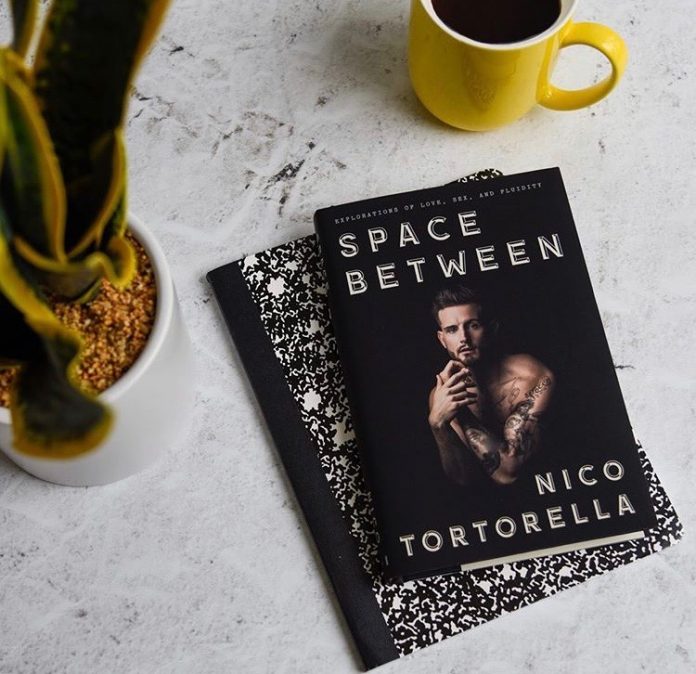 My favorite kind of conversation is a late-night heart-to-heart with a stranger. You know the type. They take place at twilight after a night out, in the dark corner of a party, or two beers into the perfect date. You’ve never met them. They don’t know you. That giddy anonymity drops your barriers and lets you see right into their soul, and them into yours. It is refreshing. It is honest, open, and pure.

Space Between, Nico Tortorella’s youthful autobiography, evokes that same sensation. Many autobiographies have an agenda, a narrative to push. Tortorella seems only motivated by that mystical desire to connect. That openness creates a thoughtful, over-honest, exploration of gender, sexuality, art, addiction, and love that takes you by surprise. Its honesty is the kind that–just like those late-night talks–you can’t fake or manufacture. It covers topics that a more plotted, manufactured narrative would have struggled to approach.

Tortorella is non-binary. It is the core of the book, and Tortorella’s journey. In the most literal sense, this means that they identify as neither exclusively male or female and they prefer the gender-neutral pronouns they/them. In a less literal sense, it means a lot more. Tortorella tells us that their pronoun “they” is plural because they are a multi-dimensional being. Throughout the book, they show us as readers, friends, and confidants, that they are every one of their experiences. They are a composite, complex being who defies singularity.

At only 31 years old, even Tortorella admits that they are very young to be writing an autobiography. They are an actor, currently starring in the sixth season of TV Land’s Younger. They are an LGBTQIA+ activist, a role which they have come into recently. Their IMDB goes back to 2009. On paper, they haven’t done much more than most other actors their age. How much could happen to a 31-year old that could fill a book?

Yet Space Between is hard to put down. Tortorella, a spiritual being, imbues everyday moments and experiences with more profound significance. In a divulging, side-tracking style, Tortorella explores the spaces between their pitfalls and accomplishments, and how they create their composite self. No moment is too small. No relationship is insignificant. Everything has meaning.

Space Between is a book written by a person who has confronted their demons, who is no longer afraid of them. It’s the story of a masculine-presenting human with a strong sense of self and their struggle with forces who try to change and silence that self. Tortorella spares nothing. Their initial shame at a teenage encounter with a male classmate; a blistering message from a partner rejecting them amid their addictions; intimate details of expressions of their sexuality. Even messages to family members, chiding or reaching out to them when we reach aspects of Tortorella’s life that they still don’t accept or understand. In their book, we watch a being from the spaces between accepted definitions create their own space.

Perhaps the greatest victory of Space Between is for non-binary visibility and acceptance. In their honesty and critical self-reflection, Tortorella opens a door for people outside of queer spaces–and inside some less accepting queer spaces–to understand and engage with the concept of gender non-binary. Tortorella doesn’t shy away from any detail of their life, revealing every intimacy for a curious reader. If you have questions, they have answers, while never pretending to represent anyone but themself. For a group who is just beginning to see visibility in US culture, Space Between is a valuable stepping stone on the path to awareness and acceptance.

Space Between is not a capstone. It is the story of how a 31-year-old human found their feet and reached the start of their story. It is a call to your eyeballs to watch this human and their journey ahead. It is a prequel the size of a lifetime. It is a case study and an introduction. It is a late-night conversation. It belongs on your nightstand.