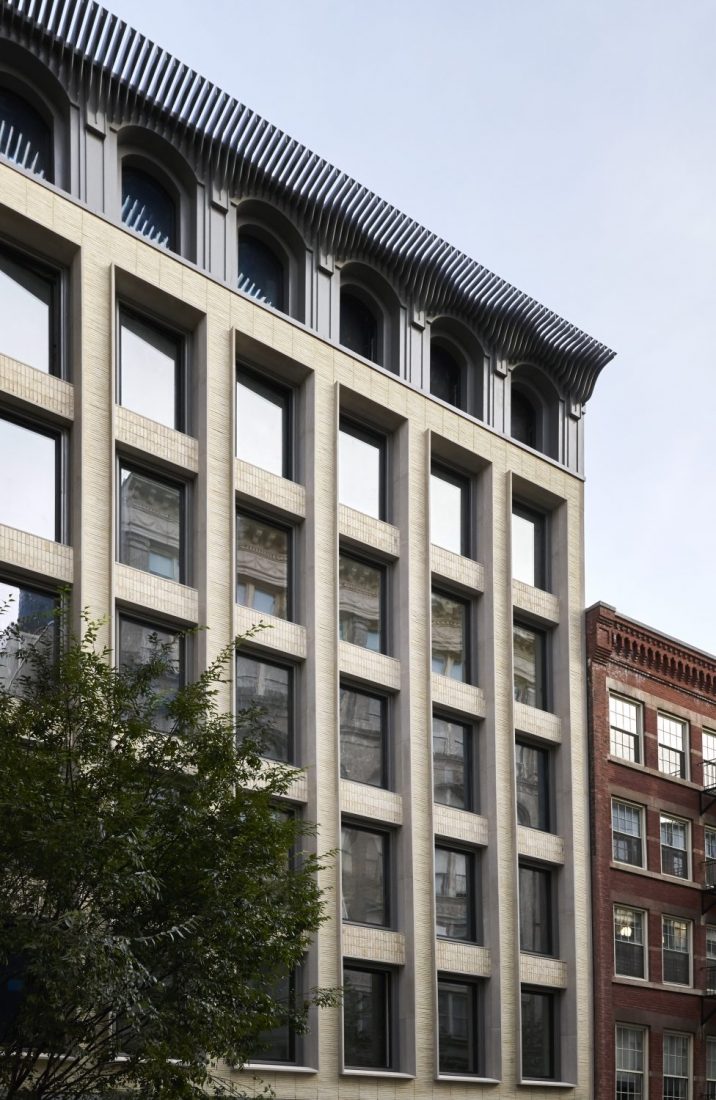 As development in New York City continues to evolve, modern glass and steel towers are more prevalent than ever before. Architecture, it seems, has only gotten more futuristic, with New York’s appearance living up to the nickname “an urban jungle” through its shiny, metallic wake. Though these modern towers are eye-catching and distinct from afar, some developers are opting to go a different route, returning to the classics: stately stone buildings and homes that offer visions of grandeur and recall a different time period through modern design and sophistication. These developments recall an era in which skilled masonry work and handcrafted aesthetic signified utter luxury.

Paying homage to the past, a trend has slowly taken root among some of today’s developers, and the return to classic building materials is making a comeback. From hand-laid brick to elegant limestone facades, these buildings aim to provide the appeal of a pre-war building, but with all of the comforts and conveniences in today’s luxury homes. Take a peek at the dream-worthy homes below to see the latest interpretations of the classics.

Designed by Beyer Blinder Belle, and the first development to break ground in the recently rezoned Hudson Square neighborhood, 70 Charlton is composed of two contextual towers connected by an enclosed breezeway overlooking a lushly landscaped courtyard. Known for their work in historic and site-sensitive districts, the architects crafted 70 Charlton to seamlessly integrate the development into the neighborhood. The facade of the building is a nod to its surroundings that include the robust, masonry buildings typical of the area’s former “Printing District” days. The building’s brick, metal and glass facade compliments its contemporary structure and anchors it to its environs.

150 Wooster Street is an extremely rare ground-up development on one of the last remaining lots in SoHo’s Cast-Iron Historic District. The building’s contemporary masonry façade references the neighborhood’s landmark prestige and is clad in imported Danish brick, handcrafted and stamped using 19th-century techniques, and framed by piers of rustic Indiana limestone that accentuate large uninterrupted expanses of glass. At the 7th floor, the facade transitions into precision cut steel paneling and cornices that take classic SoHo as a point of departure. 150 Wooster was developed and designed entirely in-house by KUB, a firm based in SoHo.

Located in the heart of one of the most coveted neighborhoods of Manhattan, 20 East End Avenue is a boutique amenity-rich condominium designed inside and out by Robert A.M. Stern Architects. The buildings design concept embodies a modern interpretation of classic pre-war architecture, with an intricate brick and handset grey Indiana limestone façade. Many residences feature oversized bay windows to maximize each home’s natural light and views of the skyline and East River, Juliet balconies, and numerous setback roof terraces.

Situated in the Upper East Side’s coveted Carnegie Hill neighborhood, 180 East 88th Street is a striking condominium being developed, designed and constructed by national real estate firm DDG. The property’s facade features nearly 600,000 handmade bricks from Petersen Tegl in Denmark. These distinctive bricks, which include the elegant, elongated Kolumba style, possess a thoroughly unique texture and color palette that reflect their handmade quality. The artisanal nature of 180 East 88th Street’s facade not only provides a welcome contrast to many of today’s steel and glass towers, but also provides a point of resonance with many of the pre-war buildings dotting the Upper East Side while maintaining a modern twist.

Situated in the heart of historic Carroll Gardens is 145 President, a rare new condominium that just launched sales in September. Designed and developed by Avery Hall Investments, a prolific young development firm known for its successful Brooklyn buildings, the firm’s design team took extreme care to create a building and aesthetic that is both timeless and warm, one that resonates with the location. With a nod to the surrounding architecture, the facade is comprised of handmade Danish bricks by acclaimed brickworks Petersen Tegl. Being handmade, each brick differs slightly in size, color and texture, thus providing the facade with great dimension and depth as well as a connection to the neighborhood’s past.

211 Schermerhorn, a boutique Boerum Hill condominium, features a custom aesthetic by renowned architect Morris Adjmi. Adjmi, who famously made his mark on Williamsburg with the conversion of an old factory building into the celebrated Wythe Hotel, was inspired by Boerum Hill’s historic architecture and old-world charm when imagining the look of 211 Schermerhorn. His team selected a handcrafted Petersen brick façade and designed generously scaled casement-style windows that seamlessly blend with surrounding styles of the neighborhood dating back to the 1800’s.