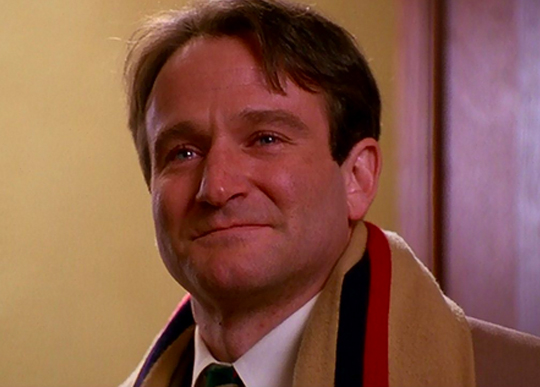 Last evening, the public was informed of a tragic loss within the cinematic community: Robin Williams had been found dead in his California home. Authorities suspect suicide, and his publicist has revealed that the 63-year-old actor had been battling depression for some time. Regardless of the details of his passing, there’s one thing we know for sure: Robin Williams will be missed.

In the wake of this great loss, the internet has flooded with notes, articles, and memories, commemorating Robin Williams, and the deep-rooted impact he has left on our lives. Williams represented the light-hearted humor that we all seek to maintain in face of the daily slog; he taught us that although love requires hard work and commitment, it’s always worth it; he reminded us that circumstance doesn’t determine our fate, and that ‘it’ is not always our fault.

In his all too short life, Robin Williams has managed to touch thousands. His portrayal of deeply genuine characters communicated an understanding of the complexity of human emotion–whether it be the slapstick genie in Aladdin, the inspirational instructor in Dead Poets Society, the strong-willed father in Mrs. Doubtfire, or the unconventional therapist in Good Will Hunting. Robin Williams was more than a ‘funny guy.’ When you peel back the layers and look beyond his seemingly humorous roles, you’ll discover his true brilliance: time and time again, Williams inspired audiences to work harder, feel deeper, and perhaps most importantly, laugh more often.

There’s certainly something to be said about a man whose passing has warranted this much media coverage. “You’re only given one little spark of madness,” he once said. “You mustn’t lose it.” Robin Williams did just that, and more: he took his ‘little spark of madness’ and nurtured it. He allowed it to grow, to become a bright, engulfing flame. And though the loss of Robin Williams is a tragic one, his flame will not be extinguished. The profound influence Williams has left on the world of film, and in each of our lives, will continue to live on. Rest in peace, Robin Williams.