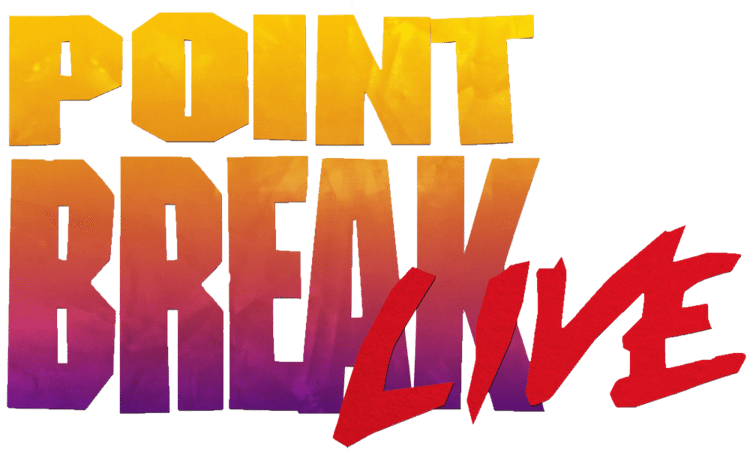 One of the definitive action movies of the early 1990s, Point Break remains as popular as ever in 2016. So much so that a big budget remake was released to theaters last year. But for long-time fans of the original film, Point Break Live! has been a staged production since 2003.

A comedic theatrical homage to the silver screen classic, Point Break Live! simultaneously pays tribute while also mocking the film’s shortcomings. As one example, the role of Johnny Utah — as originally portrayed by Keanu Reeves — is played by a member of the audience every show. In turn, there is a fair amount of improv to each performance, ensuring each performance of Point Break Live! to be unique.

In advance of the show’s Dec. 2 performance at B.B. King’s, Downtown caught up with two of the New York cast’s stars, Jo-anne Lee and Michael Christoforo. Jo-anne can be visited online at www.jo-annelee.com. More on Michael and the rest of the cast can be found at www.pointbreakliveny.com.

Where is the first venue in New York City that Point Break Live was performed?

Michael Christoforo: The first venue was at The Bell House in Brooklyn. It was awesome. None of us knew how many people wold show up on what kind of audience they were going to be. 400+ surf bros — guys and girls — screaming lines and taking this trip with us. It was a cool intro to this crazy Point Break Live world.

From the beginning of the show, was an audience member portraying Johnny Utah?

MC: An audience member was always Johnny Utah. That’s part of the appeal for the audience and also for us. We like improv, so a new Utah gives us more gifts to play with.

Has the show changed over time?

MC: The show has changed in the sense of a couple different cast members have joined, but it’s the same in the sense of being a family. We love each other and love performing together and everyone that has joined the cast has meshed in a way that’s rare.

J-AL: The show has evolved, some of the fight scenes have gotten more epic and because it’s such an improv-based show, every night is different really, depending on who the Johnny Utah is, and how the audience and the cast members interact with him.

Has anyone from the movie ever come to see your show? Or has feedback come from anyone in the cast about the show?

MC: Lee Tergesen came to a show at The Highline Ballroom not that long ago and actually got in the show. We met him before the show and he was so cool and cordial. During the show I yell “Rosie, do you copy?!” He stands up in his booth and delivers the line “Copy!” Then he runs up to the stage, I jump down and we go back stage arm over arm. It was a cool spontaneous moment that the audience loved.

J-AL: I think Gary Busey and Lori Petty — who actually played the Johnny Utah role! — have seen the L.A. version of Point Break Live. I’m still waiting for Keanu to show up!

Where do you stand on the recent remake of Point Break?

MC: I wasn’t a fan of the remake. And not just because I didn’t get an audition. Seriously, I’m not bitter and my bitterness has nothing to do with that…It seems as if the remake lost the essence of what the original was. Point Break is a surfing term that serves as a much larger metaphor. They’re those waves that people can ride for a long time only if they catch them at the perfect moment because if not, they can come crashing down. It’s all about flow state. There’s no time to think. It’s all instinctual. The new one seemed to put the idea of Point Break into other extreme activities. It just didn’t seem to work. Why remake a dope movie? I might have like it better if there was a different name. That way, there wouldn’t be a comparison to the original. It was so different, no one would have noticed. But seriously…I’m not bitter.

J-AL: Why would you do a remake? I have only seen the trailer and it looks like just an excuse for an extreme sports action movie that has nothing to do with the heart and soul of the original!

Do you have a favorite scene within the original movie?

MC: My favorite scene is the ending. It’s just the perfect culmination of two people who share the same values, but differ entirely in their pursuit of justice, meeting for the final time. Both lose. Both win. It beautiful.

J-AL: The chase scene between Johnny Utah and Bodhi, involving running through people’s backyards, dog-throwing, knee-clutching, failed attempts at shooting and much agonized screaming. So epic.

When did you first see Point Break?

MC: I first saw Point Break years ago. It was on TV. One of my brother’s friends introduced me to it. I didn’t quite understand it then, but when I was older, its gloriousness was realized.

J-AL: Gosh. Some time in the 90s? I would only see snippets though and honestly did not see the whole movie from beginning to end till I was asked to audition for the show!

Point Break aside, what is your favorite movie?

MC: Point Break aside, my second favorite movie changes all the time. Right now, it’s Midnight In Paris. There’s something so romantically-appealing about it.

What’s coming up for Point Break Live besides this Dec. 2 appearance at B.B. King’s?

MC: What’s next for us are a couple shows at the end of the month in Philly and Jersey. Then B.B. King’s.

Do you have any other shows you’re involved with? Or is Point Break Live your top commitment?

MC: In terms of other projects, I’m always working on something. Gotta create! A pilot we shot last year is being edited right now. It’s called Wickid Awesome Friends. Chris [Nester] and myself created it and Brian [Sturgill], Tristan [Griffin] and Dave [Carl] are also in it. So basically, most of the cast from Point Break. Improv is also a constant. Just getting on-stage and seeing what happens is where a lot of great ideas stem. Working the muscle is vital and the only way to do that is put in the hours.

J-AL: Right now I’m not performing with any other show, though I do have some projects lined up in the new year.

MC: Growing up in the Northeast, my hobbies are definitely seasonal, so my free time is dependent on the weather. It’s usually involving sports. In the winter, I’m on the mountain snowboarding or playing basketball. The summer, I’m on the baseball field or at the beach. Cooking is a constant as well. I cook a lot. Growing up in an Italian house made me appreciate food and company, so I like cooking for my friends. Add some puff puff into the mix, I’m a happy man.

J-AL: I love to cook! And eat! With my friends!

Are you yourself a surfer?

MC: I don’t surf, although my friend is deep into it and is says I’ll love it. Sometime, you just gotta listen to your friends. It’s on the list.

MC: To all the kids out there, the greatest piece of advice I can give is this: Lead with love and do whatever it is you love to do. We’re only here for a limited time so you might as well spend that time being happy.

J-AL: Life is short. Just go for it. Better to have lived and tried than die regretting not doing.