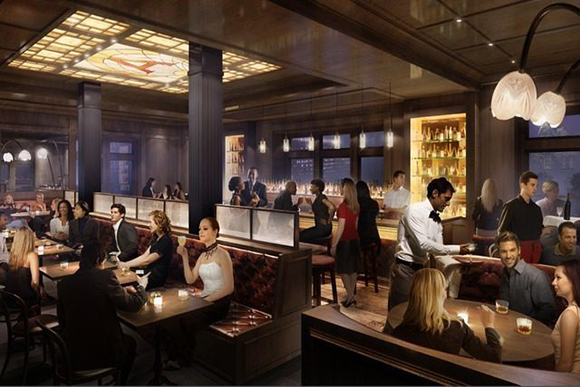 For 126 years, Pier A has stood its ground as a proud building of the city’s rich history. Now after more than two decades of being neglected and abandoned, the building is set to be revived into a popular dining destination for this Summer.

Responsible for the renovations is Danny McDonald, an Irish bar and restaurant designer whose succeeded in creating hot spots such as Ulysses’ Folk House on Pearl St., the Grace bar in Kips Bay and several others bars and restaurants around the city.

His plans for the 32,000 square foot Pier are to give it an aesthetic that represents its history and that of harbors that continue to play a vital role in New York City. “It’s a delight to stay very close to the story of this pier,” said McDonald to the Tribeca Trib. “All you have to do is re-tell it and pay it the historical respect that it deserves.”

The Pier will be divided into three varying floors, each conveying a message unique to its theme in order to offer different experiences. McDonald gave a tour of the building to the Tribeca Trib. detailing what he envisions each floor look like upon completion. The first floor will feature a beer hall and oyster bar, offering sharable menus and curated craft beers and cocktails. Beers will range from European brands to New York selections on tap, while seafood dominates the menu’s sides and entrées. The freshest oysters of the region will be at the diners disposition, with rotating varieties depending on the season. The second floor will feature more private dining areas yet still provide a warm and welcoming atmosphere. They will be the Commissioner’s Room, Galley, Stateroom, Harrison Room, and four smaller private dining rooms. As McDonald described the Commissioner’s Room it to the Trib, “It’s that kind of place you say to the guy at the door, ‘We’re going to be three for the parlor.” A highlight of the bar is that opens onto a balcony providing a splendid  view of the harbor. The Harrison Room, will be a high end bar that gives the patrons a fantastic view from West Street to 1 World Trade Center. In addition to the sightseeing, it’ll offer bar bites and a pleasurable drink program, making it a sought-after gathering place.

Finally the third floor will act as the event space for the Pier, which will be used for a variety of occasions.

The renovations for Pier A are expected to be completed by mid-summer.

Hudson Square a Gateway to the Future