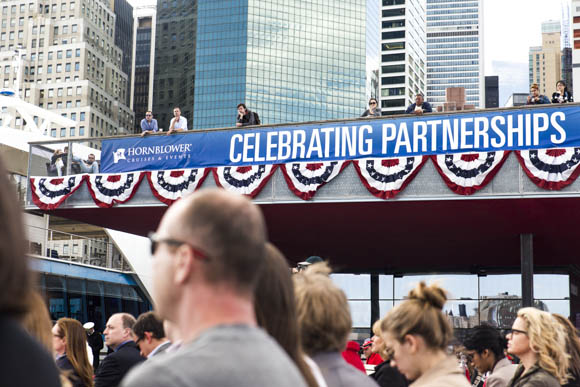 It has been a long two years coming, but Pier 15 is back in business.

Recovered and rejuvenated, since its battering from SuperStorm Sandy, the Pier has reopened to the public on the East River Waterfront. Making the occasion doubly festive was the launch of Hornblower Cruises & Events which offers river dining, sightseeing, entertainment and educational cruises against the beautiful backdrop of New York City.

The pier is a gleaming new destination on the East River Esplanade, drawing praise from community residents and leaders as a sign of the area’s full recovery from the devastating 2012 storm.

The city leased the pier to Hornblower Cruises in early 2012, and the company was lauded by Community Board 1 Chair Catherine McVay-Hughes for remaining committed to the location even after it suffered extensive damage from the natural disaster.

“It’s important that the East River Esplanade and Pier 15 are properly maintained,” Hughes told the large crowd which gathered to celebrate the Pier’s return to active duty and to welcome Hornblower Cruises to the neighborhood. The company is expected to generate 100 new jobs, helping to respond to the economic shortfalls caused by the storm. Several shops and restaurants, including the Seaport Museum, are still closed and under repair.

“The launch of Hornblower’s operations at Pier 15 is an exciting milestone of the East River Waterfront Esplanade project,” said Zachary Smith, Chief Operating Officer of the NYCEDC. “By creating new amenities and increasing access we are making New York City’s waterfront a place everyone can enjoy.”

In response to the anticipated increase in activity as a result of the pier’s revitalization, the city’s tourism department, NYC & Company has set up a new visitor center at the pier. Visitors will be able to access of information screens, concierge terminals, and digital touch screen kiosks that will provide up-to-date information on attractions, nightlife activities and any other hot spot that are exploration worthy for tourists in any of the five boroughs.

“We couldn’t think of a better place—or better partners—for our newest Official NYC Information Center location,” said Fred Dixon, NYC & Company President and CEO. ” We’re confident that this partnership will provide visitors with a richer and more dynamic experience in the Seaport and Lower Manhattan.”

Currently, the schools students are working on a project to cleanse The East River called “The Billion Oysters Project.”  The goal is to transport large numbers of oysters into the river to provide a natural filtration system, making it a more popular recreational body of water.