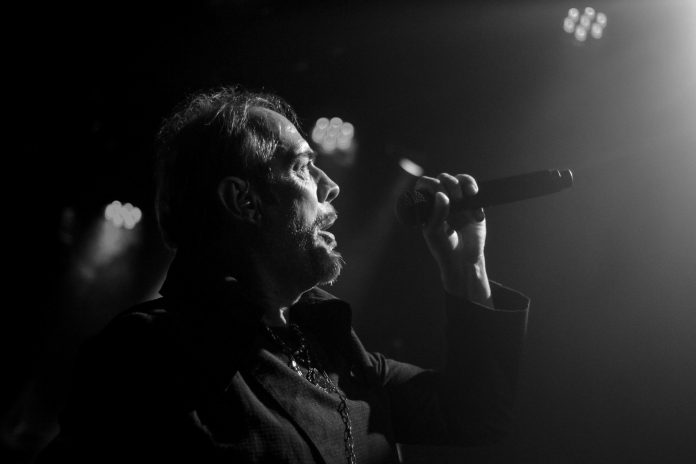 All photos by Alice Teeple

Peter Murphy is not resting on his laurels, hammering out the same songs for four decades. In fact, it speaks highly of his ever-evolving artistry that in 2019, his audience spans multiple generations. Scanning the sea of faces in the crowd at Le Poisson Rouge, where he is in residency this month, one sees the usual Siouxsie clones, spider dancing, Gen X goths, and wistful boomers. But there were many young faces present as well, equally eager to see their hero. Murphy has extraordinary charisma, even when he’s a bit salty.

The Dust show at LPR was a jolt to the chakras. Murphy’s opener both nights, Soriah, blasted the room open with traditional Mongolian chant. The astonishing performance, created with a drum, bells, folk instruments and a loop, showcased the potential of the human voice. The introduction of Tuvan throat singing proved jarring to those who came expecting vampire songs, but it fit perfectly with the Asian and Middle Eastern-influenced sound on Dust. Murphy’s thundering voice has soldiered through recent strain and still holds court splendidly. It especially melted during the ode to his daughter, Girlchild Aglow.

Murphy commanded the stage with his full album shows, bringing a fierce intimacy with those hypnotic pale eyes of his.  And the clothing! For Dust he appeared clad in a jacquard kimono, massive rings on his spindly fingers. The singer has transformed from the gaunt spectre of youth to a veritable Emperor tarot card sprung to life; Lord Summerisle live in concert.

There have been urban legends floating around of Murphy’s grouchiness, particularly over iPhones creating barriers to his performance, but he showed no sign of irritation this time. What did set him off, however, was a sound SNAFU.

“Stop the song! This isn’t on the album. STOP THE SONG!” he roared. “Alright, three verses is enough for a gig, innit?” He didn’t wait for an answer. Instead he paced around the stage, thanking his band, and fled down the stairs into the darkness, leaving some fans confused; others roaring with laughter. All was well when he returned for the encore, “Subway.” And what an encore. He played with the audience, sour mood restored to joy, fingers hopefully reaching toward a blessing.

The Ninth show and album had a more rock-n-roll oeuvre. The outfit of the night was a black Shakespearean blouse offset by long chains, and a patterned scarf that quickly made itself a nuisance and was last seen hurtling toward oblivion.

“Why are you here tonight? Is it because I’m…gorgeous?” he drolly asked, basking in the ensuing shrieks like a sleek cat in a beam of sunshine.

During I Spit Roses, a woman thrust a bouquet at him. The confetti of crimson petals exploded on the stage as the crowd sang the chorus. He was generous with praise for his musicians, particularly guitarist Mark Thwaite, and ended the show with the haunting violins of Créme de la Créme. Indeed.

The final shows are not to be missed. Murphy continues his residency through 19 August with the following performances: