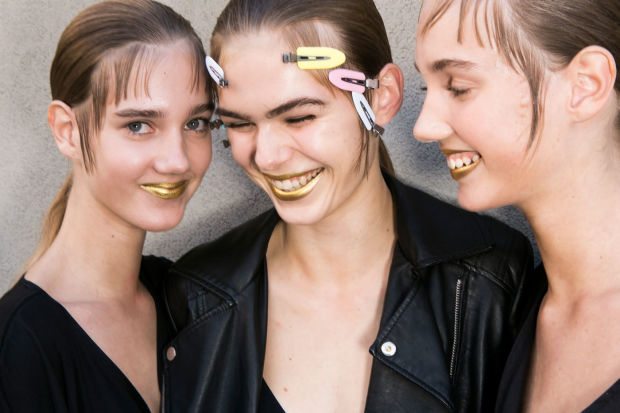 If you’re already feeling nostalgic about New York Fashion Week’s departure, then you’ve probably immersed yourself in keeping up with Paris Fashion Week. Among the collections were the normcore aesthetics of Lanvin, the cognac leather hues of Barbara Bui, and a myriad of rainbow patchwork by Manish Arora. But off the runways and backstage, famed makeup artist, Pat McGrath, was delivering the midas touch with gold 001.

What is it? A new way to wear your gold, literally. Cosmetically, it’s a metallic gold pigment with an unbelievable pay off. Painted on the eyelids and lips of runway models, McGrath’s newest beauty venture has generated a gold rush among Parisians from the Carrousel du Louvre, proliferating attention globe-wide.

This’ll be McGrath’s first product under her own name, though the makeup artist has rose to acclaim on talent alone. At the helm of Cover Girl’s ship, McGrath currently holds the title of Global Creative Art Director for a few P&G brands. Her repertoire is extensive, having led the makeup direction for Paris Fashion Week’s Prada SS16 collection. McGrath has also worked with notable designers from Miu Miu, Comme des Garçons, and Dolce and Gabbana.

Though, rumor has it, gold 001 is limited-edition and will only be releasing 1,000 items on October 21st! Keep an eye out for beauty’s newest gold standard!