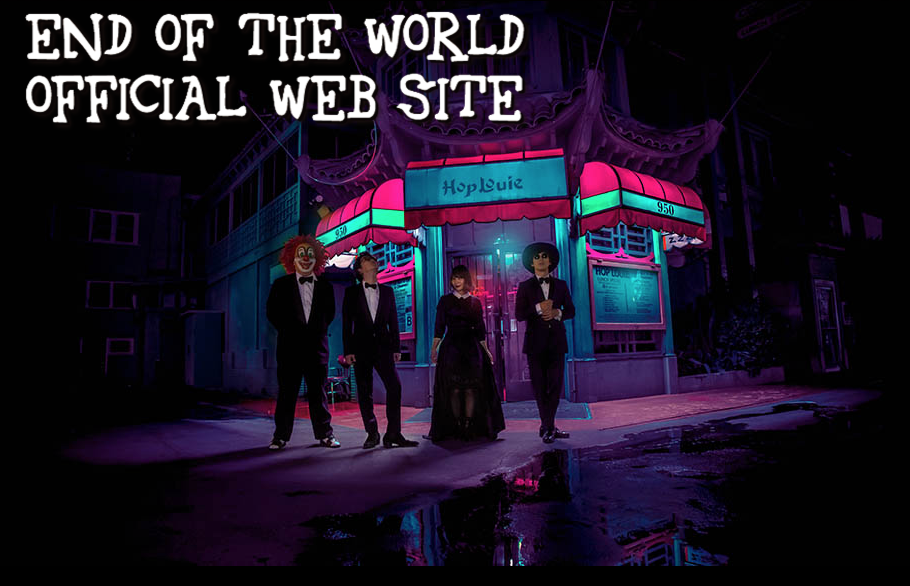 Downtown Magazine received such an overwhelming interest in this previous post by Darren Paltrowitz, we have decided to run this again with the bands new up and coming tour dates.

One of Japan’s biggest pop acts, End Of The World (a.k.a. Sekai No Owari) — formed in 2007, years after some of its members had attended primary school together. The group’s first full-length album EARTH came out on an indie label in 2010, hitting #15 on Japan’s Oricon Weekly Album chart and yielding a single that peaked at #8. The following year, Sekai No Owari signed to a major label in its native country and headlined a solo concert at the world-renowned Nippon Budokan arena.

The next studio album by the band, 2012’s Entertainment, hit #2 on the Oricon album chart and sold over 250,000 copies — double platinum certification in Japan — on the strength of multiple hit singles. 2014 brought some non-album hit singles, collaborations with Owl City and Dutch DJ Nicky Romero, and a hit documentary on Sekai No Owari called Tokyo Fantasy.

2015 included the release of the quartet’s third full-length album, Tree, which charted at #1 and sold over one million units. In support of Tree, the band headlined two nights at Nissan Stadium in July 2015, playing to close to 140,000 people between the two nights. Success also spread elsewhere in Asia as Sekai No Owari played in front of 20,000 people in Malaysia in September 2015 on the MTV World Stage, in addition to an appearance at Taiwan’s prestigious KKBOX Music Awards.

While that level of success in one’s native country — and in other regions of one’s native continent — would be enough for most bands, Sekai No Owari has its eyes set on the United States. On Aug. 17, the band made its U.S. debut at The Roxy in Los Angeles. Several nights later, Sekai No Owari headlines an intimate show at The Bowery Ballroom on Aug. 23. While hit singles “Anti-Hero” and SOS” were performed in English, the group is currently working on a new album recorded entirely in English for a 2017 release.

Band leader Nakajin, lead vocalist Fukase, pianist Saori and turntablist DJ Love all answered questions for Downtown in advance of the Roxy gig. Sekai No Owari can be followed online at www.sekainoowari.jp, in addition to its accounts on Twitter and Facebook.

Where did the decision come from to start recording in English and to tour the United States?

Fukase: I dream about traveling all over the world with my band members, and decided to write songs in English.

For someone that has not seen Sekai No Owari in concert before, how would you describe your live show? Is it only you four on-stage?

Saori: We can’t bring the stage production this time because it’s more of an intimate show, but we prepared many songs in English and we want everyone to hear them.

Do you have a favorite song to perform live?

S: It feels good to play “SOS” live. My favorite part is where there’s only piano playing and the vocal.

DJ LOVE looks like Clown from the band Slipknot. Have the two ever met before?

DJ LOVE: I’ve never met them before, but I absolutely love them. I would love to meet them one day.

Have you ever been to New York before?

Nakajin: Twice, but the both times I visited were during the middle of cold winter, and so I wanted come back when it’s warm.

Regarding your upcoming trip to New York, what are you most excited about? Is there any particular place you’re hoping to shop or a restaurant you are hoping to try?

What do you wish more people knew about Sekai No Owari? Do you think that there are any misconceptions about J-Pop?

F: It would be cool for people to find out about our background stories before starting the band, and also about the DIY venue we built from scratch. About the J-pop misconceptions, I don’t really have much to say.

Is there a career accomplishment of yours that you’re most proud of? Was it playing two nights at Nissan Stadium?

S: Yeah, I would say it’s the Twilight City concert [at Nissan Stadium]. I can still remember so vividly the view from the stage.

How did Sekai No Owari wind up collaborating with Owl City? Had you met Adam [Young] before working together?

N: I’ve been a fan of Owl City, and our manager made an initial contact to his management. We got a good response from them, that’s how we worked on the collaboration. We never had met each other before working together.

Once you have finished this upcoming tour, what’s ahead for Sekai No Owari?

N: Hoping to come right back to the States to do more shows.

Who is the best Japanese artist that our readers may not have heard before?

D: It depends, and changes all the time. But today I feel like recommending 9mm Parabellum Bullet.

S: I go to yoga, and sometimes I go to the bouldering gym with Nakajin. He shows me how to rock climb. Recently I’m really into cooking, it’s really fun.

F: We are in the middle of production right now. Stay tuned for our next new album all in English. There are YouTube videos for “Mr. Heartache,” “SOS,” and “ANTI-HERO,” so check that out too.