All heads turn: Olivia Palermo has entered the fashion scene. At 33, the socialite, influencer, and former guest judge on Project Runway has added a new title to top the list: founder and designer of her eponymous fashion label. The style is classic, vibrant, and polished, bold, and feminine. Her recent SS20 photoshoot captures her collection, inspired by her own closet and love for layered mix-and-matching.

Palermo is no novice to fashion and influence–her long-running lifestyle website can tell you that. Her innate sense of style has attracted several design collaborations in the past, including Nordstrom, Karl Lagerfeld, and the Banana Republic, but this is her first solo project. “It’s something I have always thought to do,” she told InStyle in an interview before the launch. “It was just a matter of when timing was right. I think after ten years, working on enough collaborations, my brand is changing and going into the next phase.”

That next phase will include a Spring Summer drop, with 84 pieces, which will be available on her website, as well as at Saks Fifth Avenue, with prices ranging from $275-$1,595. She has planned this season’s pieces alongside pre-fall and fall, she says, to set the tone for what the brand would become. 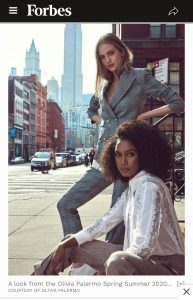 The shoot itself took place downtown, in Tribeca and the Financial District. Friend of the magazine David Cotteblanche joined stylist Schanel Bakkouche and others showing off the spiritual connection between the classic cool of the Olivia Palermo collection and the downtown neighborhoods where the designer spent a lot of her time. Cotteblanche, who has worked with Yohji Yamamoto, Christian Dior, Diane Von Furstenberg, Ralph Lauren, and Nicole Miller, was impressed. “Working with Olivia Palermo was one of the best experiences of my career,” said Cotteblanche, “Olivia is one of the best fashion influencers, and I love her new collection. It represents her personal style and energy: classy and chic.”

The shoot’s stylist, Bakkouche, is a frequent collaborator with Palermo, credited on many of her photoshoots. Stylist, Fashion Editor, and Creative Director, Bakkouche splits her time between Paris and NYC.  She has enjoyed tenures at both French and American Vogue Magazine. Since then, Schanel has led a wide range of creative projects, both digital and print, with a strong emphasis in fashion, for various publications and luxury brands. She routinely works and collaborates with top industry photographers, editors, and creatives.

Olivia Palermo’s collection is available online as well as at Saks Fifth Avenue and other specialty retailers. There are plans to add accessories, as well as a men’s line going forward, so stay tuned.