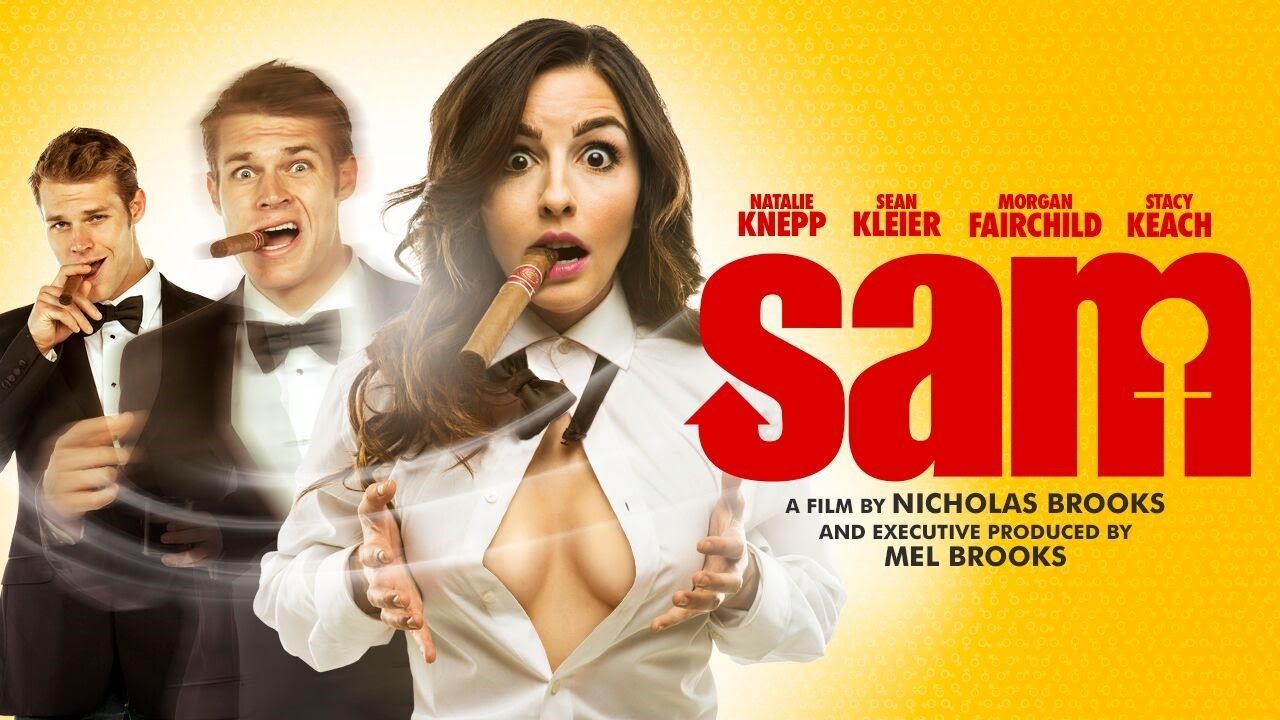 Last week, East Houston Street’s Sunshine Cinema played host to the New York City premiere and launch of the film Sam. While Sam is the first film by Nicholas Brooks, Nicholas has decades of experience within the film business as a writer and story editor. It also does not hurt that Nicholas is the son of the legendary Mel Brooks, who served as executive producer of Sam.

Nicholas, a native of New York City and an alumnus of New York University, spoke to Downtown about Sam and plenty more. More info on Sam can be found on the movie’s official website, www.samthemovie.com, and on its Facebook page. Nicholas himself can be followed on Twitter via @NickBrooks72.

Sam is your first produced film. What was the first script you had optioned?

Nicholas Brooks: What a fun question! You have to go way back to the late 80’s to answer that one! It was a script called Pumped that was optioned by a company called MCEG Entertainment. A classic 80’s comedy. Too bad we never made that one, but a lot of good stuff has happened since.

You had the premiere for Sam at Sunshine Cinema. Is that a place you had often gone when attending NYU?

NB: I was a commuter student at NYU, and so I saw a lot of stuff uptown — closer to where I lived. But I recall seeing some wonderful films at the Sunshine Cinema over the years. What a great theater! We need theaters like this — the kind that give so much love and attention to classic and indie cinema!

How would you describe Sam to someone who hasn’t yet seen the trailer?

NB: On the surface, Sam is a gender-bending switch comedy. Male chauvinist pig is transformed into a woman and has to see how the other half live. But under the surface, it’s all about the deeper bonds of love and friendship that two people — of any gender — can have. Ultimately, it’s about finding your true identity, and living from that truth.

Is Sam the first time you had collaborated professionally with your father?

NB: I worked as a story editor at Brooksfilms for more than 25 years, so we shared a lot of thoughts and ideas about moving films through the writing and production process. In terms of my directorial efforts, it’s the first time we have both had our name on the same movie — me as director, co-screenwriter, and producer, him as executive producer. My Dad has been an incredibly supportive EP on Sam, not only generous with his funds, but his praise and his nurturance.

Had you worked with any of the film’s cast prior to Sam?

NB: No, Sam is my first directorial effort, so everything was a first — but a very joyful first. Working with incredible thespians like James McCaffrey, Natalie Knepp, Sean Kleier, Stacy Keach, Morgan Fairchild, Bryan Batt — many others — has been an amazing experience. Each one is a gift to a director, full of great ideas and supportive thoughts and suggestions. I saw James McCaffrey and Bryan Batt at our screening last night, and the memories of their work on set came flooding back. James is a gem, such a thoughtful, giving, incredible actor. And Bryan is SO much fun to work with! Many joyful moments –- watching them on-screen, and then sharing hugs after the screening.

Do you have any goals for Sam? Does anything need to happen for you to view it as being successful?

NB: When you live in the indie movie world, you learn to keep your expectations modest. That leaves room for happy surprises. I am at this point so happy that Sam: 1) got finished, 2) got distributed, 3) actually got released. I am not looking any gift horses in the mouth. For those that have seen the film — and liked it — feel free to get the word out. Some nice commentary, on whatever forum works, always helps. But other than that, I am very happy with Sam’s trajectory thus far.

I know you were born in New York. Do you still see yourself as a New Yorker?

NB: Very much so. It’s in my blood, my soul. I look at the world through the eyes of someone who has grown up in this city, and appreciates its many many gifts; and yeah, some of its challenges, too! I love that we New Yorkers take for granted the wonderful, rich multicultural environment we live in. I love to talking to people who come from all over the world to be here — a cab driver from Senegal, a restaurant owner from Burma, my wonderful Sam producer Sibyl Santiago from the Philippines. I love the incredible energy of the city. It drives creativity and productivity. I love how New Yorkers love their art, their great food, their theater, and yes, their movies, even small ones. As for Sam, New York City is a character in the movie. I tried very hard to show both the energy and the beauty of the city. Some lovely skyline shots in Sam, as well as some beautiful views of Central Park, etc.

Once you are done promoting Sam, what’s coming up for you?

NB: Graphic novels! I just completed my first graphic novel –- co-written with Sam Unit Production Manager Craig Nobbs, and edited by Andy Schmidt. It’s called Mercs and is set in the world of private military contractors, modern-day mercenaries. I love the form of the graphic novel, and love the process of taking an idea or concept, and moving it through the production process; artwork, coloring, text, etc. Graphic novels are such an incredibly-rich creative medium. I find myself totally immersed in them these days. Some ideas for TV too, but that’s a longer shot.

When not busy with film, how do you like to spend your free time?

NB: I love reading, mostly nonfiction, but some fiction too. I’m reading a fascinating biography of Meyer Lansky by Robert Lacey. I LOVE graphic novels — am practically living at Comixology and similar sites these days. I like surfing YouTube, especially military history, aviation, and of course politics. We are living through one of the most fascinating elections I can remember. If you see Sam, see if you can identify some links between the film’s theme, and some of the issues popping up in the current election. I had a couple of “wow” moments last time I saw the film. And — lastly — I love eating out with friends and/or family. I’m a foodie, and it doesn’t take much to get me to a great sushi bar, Chinese restaurant, or steakhouse.

Sam aside, what was your favorite film of 2016?

NB: I am a little surprised to say this — because I don’t usually go for big budget films — but I really liked The Legend of Tarzan. Excellent acting, very polished directing, mixed with some very relevant themes, like colonial oppression and slavery in Africa. I couldn’t help but wonder if an updated version of the Tarzan legend – for film or TV – might not work. Africa is a continent of extremes – wealth and poverty, opportunity, hope and despair. The themes in the movie are even more relevant today, as we see political shifts, economic growth – albeit mixed with corruption and inequality, environmental destruction, etc.

NB: Thank you for the “foodie” question! I love those! I’ll pick five by neighborhood. Upper East Side — I love an old classic, Shun Lee Palace. Great Peking Duck, and wonderful steamed and fried pork dumplings! Midtown, it’s sushi! I love Hatsuhana, which has also been around at least a couple of decades, if not more. Incredible sushi served by a really attentive staff. Upper West Side it’s Cesca, great Italian, with some dishes I just can’t find anywhere else. The waiters are a mixed bag, some snooty, some gracious. But the management is terrific. Theater District it’s Orso. Incredible homemade pizza, great pasta!

Downtown, I love Il Cantinori — wonderful old-world Italian. Beautiful room! And every once in a while, I just go exploring in Chinatown. Joe’s Shanghai is great, with the best soup dumplings in New York City. I need to explore Brooklyn more fully, but one of the best steaks I have ever eaten is on the menu of a Williamsburg steakhouse called St. Anselm. Wow is that a good steak! I could go on for hours, but will end on this note — I could go to five restaurants a night for the rest of my life and STILL never fully sample or explore all the great food in this town!

Finally, Nicholas, any last words for the kids?

NB: For up and coming filmmakers several sets of advice, starting with two biggies: 1) Get GOOD, 2) Keep at it! In other words, practice your craft! Don’t assume the world will fall madly in love with your great idea if it is packaged in a poorly-shot, poorly-edited mess. Do the work of creating something that really enriches the viewer not only thematically, but texturally and aesthetically. Work with the very best camera crew, sound crew and actors you can find — and listen to their advice! Even if you don’t go with every suggestion, listen to people who are experienced, passionate, caring about their craft.

The second suggestion is even harder than the first — keep at it! Small cinema is mostly-failure, mixed with glorious bits of success. Learn from your failures, but use them to strengthen yourself as a storyteller in moving pictures. Best to start small, shorts are better than features for honing your craft. And network the heck out of your project. Get to know the people who run smaller film festivals, online fests, etc. Filmmaking is all about building and working with communities of creators, producers, distributors.

Finally: learn to take criticism well; you will get lots of it! And be very tough on yourself in perfecting your project. Good enough is usually not good enough. Find a way — three ways, 16 ways — to make it better. And then polish it a little more. And a little good luck never hurts!