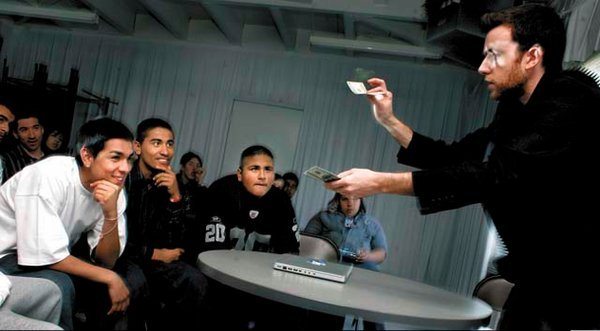 Magic Mike has come to New York! No, not that Magic Mike. This Mike is actually a magician.

Mike Jacobson is a young talent from LA, but he’s made a big name for himself already. He is the highest rated magician in New York on Yelp and has worked private events for big names, such as Facebook and Google.

This magician, who coined the name Magic Mike way before the movie, started practicing magic when he was only nine years old. His grandfather from Ohio, who worked as a clown on the weekends, would visit Mike’s family in LA and perform magic for his grandchildren. This served as his introduction to the art of magic, but it wasn’t until he attended a day camp and saw a magic show that Mike really wanted to become a magician.

For a long time he would only perform one trick over and over again, showing his talent to anyone who would watch.

When Magic Mike turned 12, he auditioned to become a junior member at the Magic Castle. This place is a sort of Mecca for magicians, in Mike’s own words. The Magic Castle is club where magicians can gather, perform shows and learn to improve their trade. It’s very exclusive, with only members or their guests being allowed in the “castle”.

The audition consisted of performing a five minute show for a panel of five judges, the current junior members and the parents of those trying out, making for quite a large audience. Mike was accepted after his first audition, making him the youngest to be accepted as a junior member at the time.

After years of practicing and becoming a regular member at the Magic Castle, Mike Jacobson became Magic Mike, a part time magician who also works in advertising. It was during his time in LA that Mike auditioned to be on the Ellen show. He was chosen from a group of magicians as the one to perform on the hit talk show, and you can watch the episode here.

He then went on to describe how he even performed for the high prince of Saudi Arabia once.

Mike brought his magic to New York just a couple years ago, saying that it is a place where adventure just finds you, as opposed to LA, where your experience is what you make of it.

He lives in the downtown area and absolutely loves it, saying he rarely ever travels above 14th Street. He enjoys the people watching and the restaurants, and when he has free time he likes to grab a sandwich and visit Tompkin’s Square Park. However, when it comes to restaurants and night life, he doesn’t seem to favor one place in particular.

“I try not to go to the same place twice, to be honest,” he says, “which is cool, because you can do that here.”

Even though Mike is just a part-time magician, he brings something new to the craft that breaks the top hat and rabbit stereotype.

He describes his shows as “not your grandpa’s magic” and “the only bad-ass magic show in the city”.

Magic Mike does something called magic battles, in which the host of the event secretly hires two magicians, but only one will start the show. The other appears later, pretending to be a guest at the party looking to upstage the performer. The pair then start a battle of magic, doubling the fun.

He also has secret shows, which fill up fast despite only being advertised through word of mouth. His next secret show is already sold out, and it’s three months away!

The location of the show isn’t revealed, adding to the mystery of the show. However, Magic Mike encourages you to try and find his shows, promising a thrilling night of magic.

Mike’s magic shows are different from the large smoke and mirror productions you might see in Vegas. His tricks are wittier and more personal, making it seem like you’re being shown magic by a friend at a party.

For a casual, funny and incredibly mind-blowing show, be sure to look up the original and truly magic Mike.