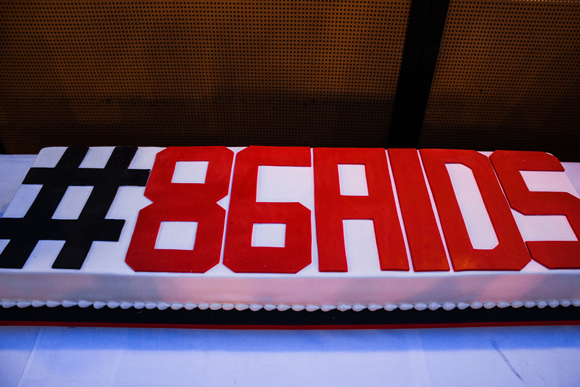 EAT (RED) DRINK (RED) & SAVE LIVES takes place June 1-10 and features restaurants that transform a dish or a cocktail on their menu into a signature, (RED) creation, with participants making a donation to the Global Fund, an international financing institution dedicated to attracting and disbursing resources to treat AIDS.

When you buy something (RED), 50 percent of the proceeds are donated to AIDS research. All of the money (RED) raises is used to fund HIV/AIDS programs in Africa, making it possible for the world to diminish the transmission of HIV from mothers to their offspring.

Batali is excited about the effect the campaign will have and wants to help in any way possible. “Wherever the (RED) campaign is involved I want to be there. I want to eat red, I want to drink red, and I want to help save lives,” said Batali. Batali was interested in the campaign from the beginning, but once he heard of the opportunity to be paired with Pat LaFrieda, he knew he couldn’t miss out. “I’m dear old friends with Bono and all of the people involved here,” said Batali. “When asked if I wanted to join I said I would need someone just as involved as me. That someone was Pat LeFrieda; we both got together and concluded that this would be a great idea.”

LaFrieda knows that the (RED) campaign has an impact on a number of children born with AIDS every day and that was his biggest motivation to join the movement.“Mario explained to me what the cause was about and the idea that 700 children are born with AIDS every day. This can get that number down to zero and deliver the first generation of children without it; that was my inspiration,” said LaFrieda. LaFrieda and Batali supplied restaurants with meat and ways to turn their menus (RED). “I immediately thought of supplying restaurants with meat in a very inexpensive way and basically giving it away so that they could all participate,” said LaFrieda. “We were able to get 500 food establishments in 120 different cities to partake in the movement. It’s amazing.”

Deborah Dugan, Chief Executive Officer of (RED), explained that the idea behind the campaign was finding a common interest among people today.“We kept thinking of food like the new fashion,” said Dugan. “It’s such a craze and a part of people’s lives and (RED) tries to go where people’s passions are. We do art, design and music, but when the question rose of how to do food, we went to Mario Batali, who knows just how to do food.”

Dugan is thrilled with the outcome of the event and hopes that this is something that will continue throughout the years.

“We are moved and humbled by the whole thing. We’re very happy,” said Dugan.