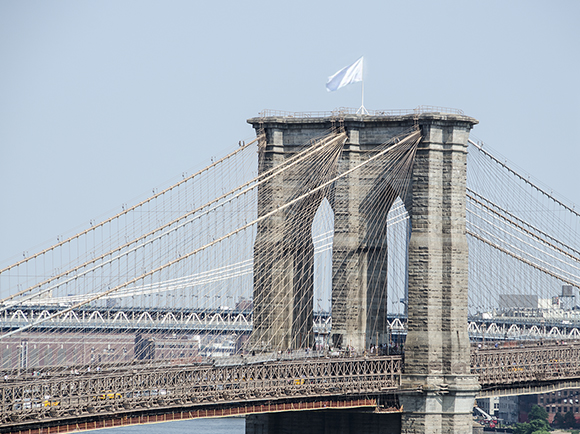 This morning, Downtown Manhattan awoke to an unexpected sight: two bleached flags atop the Brooklyn Bridge. A quintessential New York landmark, the historic bridge is decorated with our nation’s most treasured symbol: The American Flag. But this morning, in place of the bridge’s classic star spangled banner, stood two white flags—recognized by many as a symbol of surrender.

The  flags were first noticed around 7am, and the banners were removed shortly after. NYPD officers are stumped as to how the offenders were able to subtly scale the enormous structure; the appearance of these flags remains a mystery. A full investigation has been launched, but as of today (July 22nd) at 4pm, officials have yet to release any updates as to whom the perpetrators might be, and why the act might have been committed.

Downtown residents have mixed feelings about the matter. Some think that the act was a serious threat to freedom. Others fear for their safety. In a statement, Brooklyn Borough President Eric Adams stated, “If flying a white flag atop the Brooklyn Bridge is someone’s idea of a joke, I’m not laughing.”