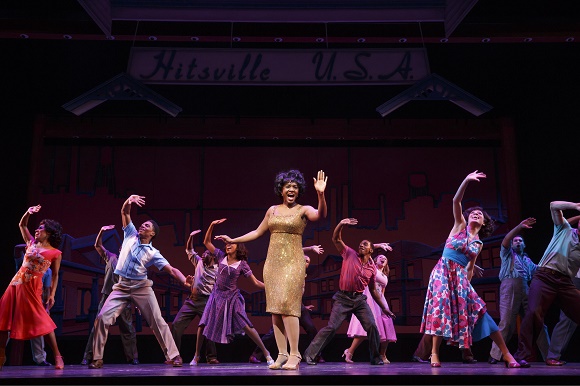 The cast of Motown the Musical outside of the famous Hitsville U.S.A.

The 1960s were a turbulent time in our nation’s history. The country was in the midst of the Vietnam War, a rising counterculture clashed with conservative America, and the Civil Rights Movement greatly advanced the freedoms of African-Americans in the face of racist resistance. This decade was a critical juncture in American history, but perhaps the most enduring product of the time was the music people created in response to the civil unrest.

Motown the Musical tells the story of Berry Gordy, founder of the musical institution Motown Records, and his journey finding some of the most influential bands and artists of all time. The musical accompaniment is composed entirely of Motown’s many hits over the years, featuring the likes of Smokey Robinson, Marvin Gaye, The Supremes, and the Jackson 5.

Josh Tower takes on the role of Berry Gordy. Tower said he has been a fan of Motown music all of his life, and through his portrayal of the legendary producer he has had the chance to gain new appreciation for the effort that went into bringing this music to the masses.

“You hear the music and you grow up with it, and say ‘this is great music,’” Tower said. “But you don’t really think about where it came from and how difficult it was then, at the time Motown was started, to get the ball rolling on a black owned company…I’ve been able to appreciate Motown from its roots and where it came from.”

The majority of the production’s 66 songs are performed in medleys of abbreviated variations, but each note is just as catchy as it was the day Gordy unleashed the tune to the world. Such a large catalogue of classics requires a large ensemble of talented performers to convey the essence exuded by the soulful music, and Tower said the cast is more than up to the challenge.

“I would say that the ensemble is absolutely essential to the show,” Tower said. “There’s a ton of talented people on that stage who have been in the business for a long time, and some newcomers as well, but there’s a lot of experience up there.”

One performance that shines with the most prominence is that of a young Michael Jackson (Raymond Luke Jr.), who seems to embody the spirit of the late icon as he fronts three of the Jackson 5’s famous hits before an enamored audience. Other stand-outs are Diana Ross (Krystal Joy Brown), who captures the magnetic singer’s enchanting stage presence with uncanny likeness, and Smokey Robinson (Charl Brown), who received a Tony Award nomination in 2013 for his portrayal that is literally, pitch perfect.

Tower explained that the face of music would not be what it is today without the influence of Motown, and no matter what the background, any person can engage with the rhythm.

“Every one of them has a catchy tune that makes anyone of any religion, any color, snap their fingers and sing that song on a daily basis,” Tower said. “Any Motown song, they want it to grab you within 20 seconds, and literally every hit that Motown has had will grab a listener in [that time]…somehow the Motown rhythm connects right to the internal rhythm inside of everybody.”

Motown the Musical is a wondrous sensory experience. Berry Gordy’s life story may fall at the waist-side at times to make room for the plethora of songs to be sung, but the music is greatest thing Gordy has left behind. Without him, names like Smokey Robinson, Michael Jackson, and Diana Ross wouldn’t hold the weight they hold today. Motown the Musical might not be the epitome of storytelling, but it is absolutely one of the most entertaining shows on all of Broadway.