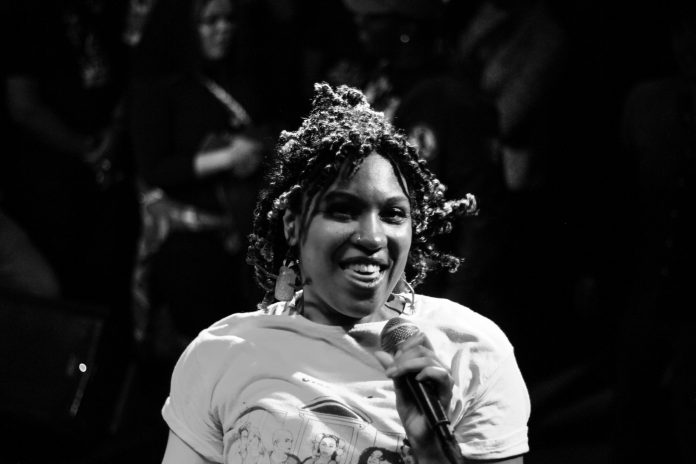 There is a tour de force coming straight out of Bed-Stuy, usually seen with some giant french fries dangling from her ears.

Her name is Miss Eaves. You may have read about her in the New York Times, Jezebel, or Glamour…or perhaps one of your friends sent you a link to her 2017 viral video Thunder Thighs, a balls-out anthem to body positivity that captivated over two million people.

Miss Eaves is a vivid onstage treasure. There is nothing precious about her performances. In a society hell-bent on silence and censorship in the name of propriety, Miss Eaves lets it all hang out in a stream of unfettered truths.

Her shows are a potent mix of John Waters, Amy Sedaris, and Missy Elliott. She is shocking, blunt, and funny as hell. She also isn’t shy on stage, playfully confronting her audience, calling out bad behavior and celebrating the good stuff of being human.

Miss Eaves recently dropped a new EP, called sad, written during the throes of Seasonal Affective Disorder.  Since the album release, Miss Eaves spent this summer globetrotting all over Europe, Canada, and the US. Her April show at the Bowery Electric in NYC was a mix of uproarious laughter and, with the merry announcement of Bush For The Push, a song about pubic hair grooming…the shifty discomfort of your grade 4 sex-ed class.

“Don’t tell me I’m too hairy to eat

‘Cause I’m all natural: Bon Appetit!

In addition to her eight-year career as a feminist rapper, Miss Eaves’ alter-ego, Shanthony Exum, is an accomplished multimedia artist. She is also proudly DIY, self-funding her projects and occasionally collaborating with other talented artists and designers. She is particularly supportive of small businesses, particularly those that are queer-owned.

Miss Eaves recently released a video for Left Swipe Left, describing the depressing nature of Tinder dating. It will undoubtedly have you chanting along during your next attempt at online love….but “it’s ok, tho’.”

Eaves recently took her creative design sense to the streets with a clever guerrilla marketing campaign. Xeroxed street flyers of Eaves trapped in a cardboard Tinder world with the frantic heading “DATE ME! PLEAAAASE!” appeared in Manhattan and Brooklyn, complete with pull-off tabs linking to the video. Eaves hung them herself, documenting the results on her Facebook feed.

sad is now available on all streaming platforms. Get that plate of cheese and chocolate out and play this jam loud. You’re gonna be fine and she’ll tell you why.