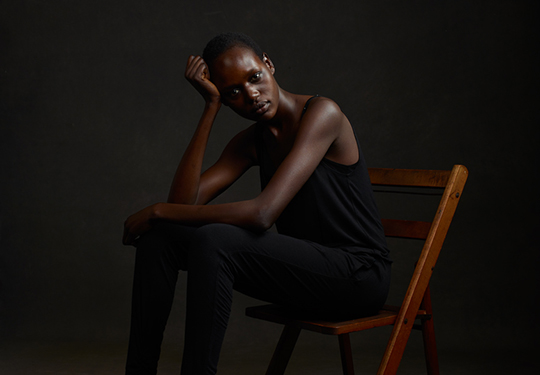 Mike Mellia‘s latest photo exhibition, “Our Side of the Story,” captures the grim reality of 14 South Sudanese citizens who escaped the struggle of political repression, and are now living in America and working as supermodels, actors, and students. Together, they remain activists against the struggle of oppression of their people in South Sudan.

The exhibition will be open to the public tomorrow night from 6 p.m. to 9 p.m. at the Tapir Editions Gallery at 39 White Street in Tribeca.

The Bronx-born, Regis High School and Columbia University educated photographer is the son of music and math teachers and takes a creative approach to his storytelling. He came to prominence with his celebrated work “self-absorbed” received global attention. The exhibition features 14 portraits of the South Sudanese individuals who escaped the conflict, now in America working as supermodels (Louis Vuitton, Lanvin, etc), actors (2 co-stars of Reese Witherspoon’s upcoming movie), and humanitarians.  This project was achieved in collaboration with Sudanese supermodel Nykhor Paul, working to end the circle of violence and exile.

In “Our Side,” Mellia captures a mood of uncertainty, and fear. The series is a cry for help, bringing awareness through these haunting images of the oppressed. For more information about this exhibition please visit: guestofaguest.com