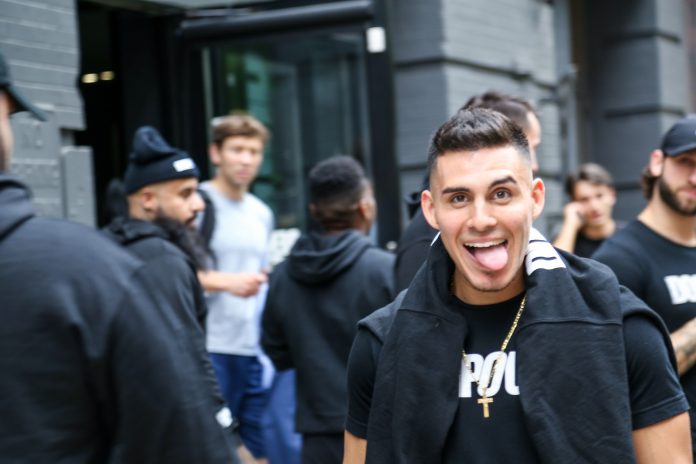 Dogpound NYC employees were greeted with a treat last night: a Times Square billboard showing gym and employee highlights and flashing the Dogpound logo. Trainers watched as their faces flickered 50 feet in the air, running, lifting, and posing in Dogpound attire. They let out a cheer, echoing over the sounds of the square where many had stopped to watch. It was the first of its kind for the fledgling fitness empire, and a dizzyingly tall “thank you” to their staff.

The Dogpound was already a global phenomenon when the billboard went up. In four years, owner Kirk Myers has grown the gym into a global brand, training all over the world with celebrity clientele. They opened their second permanent location in Los Angeles only a few months ago. The Dogpound’s NYC gym–where the franchise began–is a host to more than 50 trainers, masseuses, and other employees.

Amongst the employees and other guests was celebrity/Dogpound member/investor Oliver Trevena. “It was so amazing to be a part of such a monumental moment for an incredibly inspiring brand,” he told Downtown, “To witness the team’s reaction and the energy surrounding it was unforgettable & so excited to be an investor and part of the DP family!”

The trip was organized with the help of Downtown Magazine’s CEO Grace A. Capobianco. She and Myers have known each other since the magazine’s launch. Myers is Capobianco’s personal trainer as well as Downtown’s fitness editor for several years prior to the launch of the Dogpound. Capobianco said that we are extremely excited to announce that “Dogpound by Kirk Myers Fitness” will once again be heading up our print and digital fitness pages starting with the Fall 2019 issue.

At 5:45 pm, the Dogpound staff gathered outside the gym. They crowded a coach bus, laughing and chanting. Only the management and select Downtown Magazine staff knew where they were headed or why.

30 minutes later they disembarked outside of Times Square. They were met with one of the Square’s most prominent residents, the Times Square Naked Cowboy. The stripped singer serenaded the team, turning his back to reveal a pair of Dogpound underwear worn for the occasion. The cowboy led his posse through Times Square, stopping in the center for pictures, chants, and more quiet speculation on the trip’s purpose.

A musical eruption interrupted the affair as a dozen Dogpound-clad dancers burst into motion, clearing a space for a spontaneous dance number. The Dogpound crowd, which had grown with late arrivals and guests, was now surrounded by a sea of onlookers who stopped to snapshots of the scene. At 6:59 and 55 seconds, the music dropped and the dancers froze, their fingers pointed up at a screen towering 100 ft above the square.

The screen went black and flooded with words in Dogpound brand black and white. Disbelief evaporated as trainers saw their faces on the screen–running, lifting, biking, laughing. They pointed and called out to each other. They chanted and cheered. The energy was electric.

“Having been born and raised in NYC by immigrant parents, Times Square is the world’s greatest stage,” says Rhys Athayde, The Dogpound’s Chief Experience Officer, “All I wanted to do was share the news with everyone. For our DP family, it was worth the wait to see the looks of shock, awe, accomplishment, and pride when we took over the heart of NYC.”

The billboard was only up for 20 minutes, but the staff sees it as a sign of more to come. The Dogpound expands, it has its eyes on the world. For 20 minutes in the center of the world, that world had an eye on them.