This feature originally appeared in the Spring 2011 issue of Downtown magazine.

Perhaps the great cities of the future are currently just a clearing on the tip of an island in a huge bay; that was what Verrazano glimpsed in 1524, and Henry Hudson confirmed in his voyage of 1609. No, it was not the Northwest Passage to Cathay (China) that exploratory mariners had searched for vainly, but it was one of the finest natural harbors in the world, fed by a massive river and shielded from the worst of the North Atlantic’s icy blasts.
If geography is destiny, then here was a remote and wild locale with enormous potential. All the major European powers had been attempting to infiltrate this vast hemisphere, and while their main agenda was establishing trade across the Pacific, Hudson and others noted the remarkable population of beavers to be found in this New World, whose warm pelt was a fashion staple from London to the Vatican.
One of Hudson’s men named the island “Manahatta,” from an uneasy and garbled talk with the Native Americans who found themselves facing a danger they could scarcely conceive. They may not have wished to reveal their true name, although it seems now they were of the Lenape Tribe.
While the English colonies stretched across harsh New England, and the Spanish were all over South America, Mexico, California, Texas and Florida, and the French were pressing into present-day Canada, oddly enough it was the Dutch who sent a small group of French-speaking Walloons to settle the very tip of Manhattan Island. They were cleverly attempting to drive a wedge into the New World and to play out European politics on a new shore—hardly the last time such an attempt would be made.
Our first view of the modest settlement shows a star-shaped fort, a windmill and a cluster of low houses. By 1626 the Dutch had a foothold and were expanding up the Hudson, establishing trading posts and forts as far as Albany and dealing with the natives for beaver pelts, which would establish the first fortunes to be derived from the New World.
Did Peter Minuit actually buy the island of Manhattan for $24 on behalf of the Dutch West India Company? It seems the real price was 60 guilders (about $37) as well as farming implements and colored beads, and that Minuit only was mentioned tangentially as part of the deal. Such legends die hard, and the notion of purchasing the entire shebang for pocket change is an attractive one.
Doing some tricky math and allowing for inflation, experts suspect this was worth about one thousand dollars— with the proviso that then, just as now, a given entity is worth whatever someone is willing to pay for it—like your Aunt Lucy’s beat-up chair, which turns out to be a Hepplewhite. There is a very good chance that no one had ever offered the Lenape Tribe any monies or goods whatsoever for the land and an even better chance that they did not understand the transference of property anyway.
“If geography is destiny, then here was a remote and wild locale with enormous potential.”
There is almost nothing left of New Amsterdam, as the Dutch called their settlement, due to the depredations of fire and the cyclical swirl of change that has always been a landmark of Lower Manhattan, from 1626 to today. But the names remain, such as the fact that Wall Street actually marks the line of a wooden palisade built to defend the Walloons from the provoked and sometimes violent local peoples.
And Broadway itself, winding thirteen and a half miles south from Spuyten Duyvil to the Battery, is the track of an old Indian trail. A “bowerie” is an orchard, and the word was attached to many of the small farms that popped up north of the protective wall.
You can find 19th century buildings that mimic the high-stepped gables of houses in Amsterdam, but none of the original wooden structures have survived 400 years of relentless disaster, building and rebuilding.
As Thoreau told us, it’s not what you see, but what you make of what you see, and with the right sort of eyes you can see Henry Hudson’s ship, Half Moon, sailing up the harbor in 1609. And with the right map you can visit some of the original streets, such as Nassau Street and Maiden Lane. And with the right imagination you can scour the modern buildings from the landscape momentarily and picture the candles glowing through the small multi-paned windows of 30 small houses by 1628, and imagine the warm hearth-sides of some 200 Walloons who were the first New Yorkers. From a seemingly trackless wilderness they built the start of what was to become the greatest city in the world. 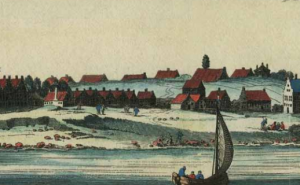 Peter Minuit (1580- 1638) is one of those old New York names that we never quite fully comprehend––but we should. He was a Walloon from present day Germany who moved to Holland to escape religious persecution. Minuit came across the Atlantic and was the Director General of New Netherland—a grand title for a somewhat modest settlement based at the southern tip of Manhattan. Additionally, he helped to consolidate outlying settlements, such as the Dutch who went up the Hudson as far as Albany in search of beaver, and after being relieved from his post (1633) went on to found New Sweden on the banks of the Delaware River. Eventually, he died at sea—a common obituary in a time of poor navigation and wonky ships. 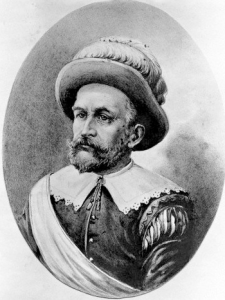 His enduring legacy is the purchase of Manhattan Island on May 24, 1626, though it is suspected that he was not the main dealmaker. There is also a wonderful line of speculation that he actually bought the island from a tribe that did not own it––the Canarsee Tribe from Long Island. This latter myth, redolent of subsequent purchases of the Brooklyn Bridge by unwary investors many times over, is perhaps too good and too funny to be true.
It may be that both sides thought they were getting the better of the other, making this the primordial “New York Deal.” “Let the buyer beware!” has always been a Manhattan proverb in Latin, Dutch, English and about seventy other languages.
Today Peter Minuit’s name can be found at Peter Minuit Plaza by the Whitehall Ferry Terminal, on a granite flagstaff base in Battery Park and in the name of the Peter Minuit Chapter of the Daughters of the American Revolution.
Director General Minuit has also appeared countless times in cartoons and films, perhaps most notably being played by native New Yorker Groucho Marx in the 1957 comedy The Story of Mankind.
If his story is a myth, it is a darn fine one, especially if one imagines the Canarsee canoes on the East River paddling back to Long Island––with their laughter ringing out over the waters.