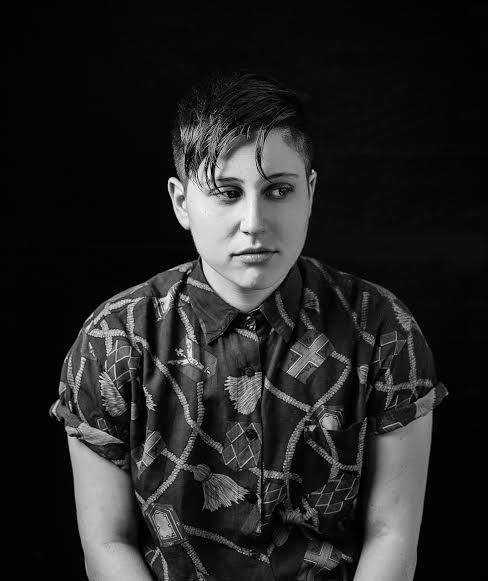 As noted below within one of my questions, I first encountered Mal Blum a few years ago as the opener for Mike Doughty at City Winery. Mal won over an audience that primarily seemed to be there to hear Soul Coughing songs, which Mike hadn’t played live to a New York audience in years. Since then, Mal had a Top 10 video on Logo TV and has appeared plenty alongside comic Chris Gethard, beyond gigging with Amanda Palmer.

When I saw that Mal had a new album (You Look A Lot Like Me, as released on October 2nd) and a pair of upcoming New York City gigs coming up in support of that, I knew it was to put a request into Mal’s publicist some for Q&A.

What do you wish more people knew about Mal Blum?

Mal Blum: I’m a Cancer Sun Sign and I have a Virgo Rising and an Aries Moon and my Venus is in Gemini, I think that’s everything…?

Your forthcoming album was produced by Marissa Paternoster of Screaming Females. How did that partnership come about?

M: I was talking to Joe from Don Giovanni [Records] about who should produce the album over the phone. He was touring with Marissa and he was like “Hey, what about Marissa?” and I was like “That’s the best idea I’ve ever heard,” and then waited with baited breath for him to play her the demos. Then a few weeks later, she came over and we played guitars and talked about the songs.

Stylistically, how does You Look A Lot Like Me compare to Tempest In A Teacup?

M: You Look A Lot Like Me is more of a “rock” record, the guitars are grungier and the arrangements are stripped down — just bass, drums, and electric guitar, mostly. Tempest In A Teacup was half solo songs, and the other half of it was band songs, but acoustic guitar-based and the arrangements also included a lot of other instruments: piano, cello, different voices. Also, the songs on Tempest In A Teacup, and all the preceding records, are longer because I didn’t have a producer suggesting I shorten them, and for some reason I love to write seven-minute songs.

Tempest In A Teacup was crowdfunded, whereas your forthcoming album is coming out through a proper label. Would you ever see yourself crowdfunding a release in the future?

M: Maybe! I feel like I will want to keep working with Don Giovanni for making records, they are a great label and I feel very supported. I think direct fan-to-artist support is a really important model though, and I’m interested in how it might manifest in new and different ways in the coming years. It all depends on the project.

How did you first encounter Chris Gethard?

M: I was one of the musical guests on his show when it was on MNN, and we took to each other because we are both sad, earnest, funny people. He is one of the best people I know.

I first saw you when you opened for Mike Doughty at City Winery. At that gig, you covered a Ke$ha song. Are there any current pop songs in an average Mal Blum setlist? Or was Ke$ha a special case?

M: That was a fun show! There are no current pop songs in my setlist, but I have been covering a lot of Springsteen at my solo shows. This upcoming tour is a band tour though, you are safe.

As someone who’s done a lot of touring as a support act, do you enjoy being an opener? Or is it simply a necessary evil?

M: I like being an opener. I feel like an underdog and I have an incessant need for earned validation, so it’s a pretty comfortable role for me. It doesn’t pay very much though, but it’s a trade-off.

What do you like to do with yourself when you don’t have to work?

M: Well, I think a lot of smaller but working and touring artists probably feel this way, but I’m kind of always working. I have support on my side right now with the label and the publicist, but I think a lot of us have this understanding if you don’t do a certain amount of work for yourself every day, no one else is going to do it for you. So it’s been good to force myself to unplug some days; go somewhere I can’t check my e-mail, go to Riis [Park] beach, go to the botanical garden, go on a date, etc.

Is there a particular go-to spot for you in Manhattan?

M: If we’re being literal, the place I go the most in Manhattan — as opposed to the other boroughs — is a clinic in Herald Square for therapy.

Finally, Mal, any last words for the kids?

M: For the kids…Be kind to yourself. Eat a green thing and go for a walk every once in a while. Write your feelings down. Do your best.