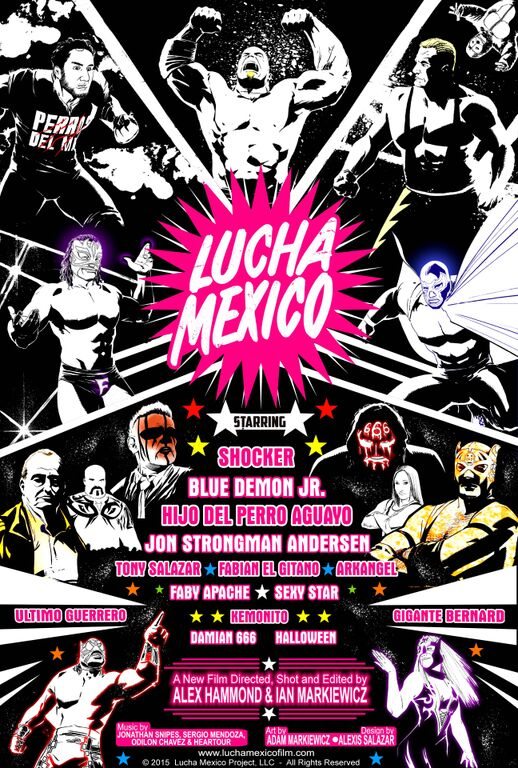 Thanks to shows like Hard Knocks and Road To The NHL Winter Classic, the inner-workings of the professional sports world have been widely-broadcasted on cable for more than a decade. Professional wrestling – or sports entertainment, as WWE generally refers to it – has been somewhat exposed due to niche programming like Breaking Ground and Gut Check, but not all of the organizations within its field have been very forthcoming. In turn, a lot of people see a movie like The Wrestler to be the gospel with Mickey Rourke as an accurate representation of a legendary wrestler.

Filmmakers Ian Markiewicz and Alexandria Hammond present an interesting alternative to The Wrestler with Lucha Mexico. Screening during DOC NYC 2015, Lucha Mexico can be seen at the SVA Theatre [333 West 23rd St.] on Nov. 13 and at Bow Tie Cinemas [260 West 23rd St.] on Nov. 18. Ian and Alexandria were previously part of the festival with Better Than Something: Jay Reatard, a film about the late indie-rock icon, as screened in 2011. Both proud residents of New York City, the two directors opted to have the U.S. premiere of Lucha Mexico be at DOC NYC 2015.

As Alexandria explained within our Q&A, one need not be a fan of wrestling – past or present – to enjoy Lucha Mexico. The same goes for fans of documentaries. Instead, the film ought to appeal to anyone seeking to be entertained by colorful characters and/or hoping to learn about what’s actually happening behind the scenes with said colorful characters. Blue Demon Jr., El Hijo Del Perro Aguayo and American bodybuilder Jon “Strongman” Andersen are among the film’s willing participants.

For more information on the film itself, check out its website at http://www.luchamexicofilm.com. On Twitter, Ian and Alexandria can be tracked under the handle @luchamexicofilm.

When were you first exposed to professional wrestling?

Alexandria Hammond: As a kid, wrestling was always on TV, so I knew Hulk Hogan and Macho Man. But I was never exposed to it in any serious way until years later when I was working with Ian. He had tons of VHS tapes of old pro wrestling matches, and his interest drove me to learn more. I didn’t know much about Lucha Libre other than the masks — but when I saw my first match on TV, with luchadores throwing themselves around the ring, I was immediately drawn to it. I realized Lucha Libre was unique and felt an intimate connection to it.

I: I’ve been into wrestling my whole life. Tons of people I knew growing up, both friends and family, were huge fans, so it was all around me and I loved it. But having been born in Stamford, Conn. — home to WWF/WWE headquarters — and raised in the area, it always felt a bit more personal.

What do you wish more people knew about wrestling in general?

I: The whole thing about real, fake or fixed? Get over it. It’s not always about who wins or loses, it’s about the performance.

A: I think a lot people who don’t know much about wrestling have a very negative opinion. It would be great if more people could respect the dedication and grueling work of these wrestlers, and see that it’s not just a show, but a sport where athletes actually put their lives on the line for your entertainment.

Given the controversy that the movie Beyond The Mat attracted, did you face any hesitation from wrestlers about participating in a movie that pulls the curtain back?

I: Some wrestlers will always be wary of people outside their world trying to expose them, especially masked Luchadores. Beyond The Mat didn’t help the situation at all. For those who were familiar with it, we had to make it clear that our film was something very different. Different approach, different attitude, and we kept to that promise.

A: It did come up a few times when people asked what kind of film we were trying to make. It was challenging to convince them that we could be trusted with their stories, and most promoters are hesitant about exposing too much. Of course, many of the masked wrestlers were harder to get close to because they want to protect their identity, which is something I have a deep respect for.

What was the most challenging part of making Lucha Mexico?

A: There were many challenges in making a film like this, because of the scale of the world. We quickly realized that we didn’t want to make a film about one wrestler, we felt it wouldn’t capture the truth. To accomplish that, we shot for several years and captured hundreds of hours of footage. Editing the film was probably the biggest challenge. We had to cut out wrestlers that we became close to, and lost many incredible scenes along with them.

I: It takes a long time to gain the kind of trust we earned. On top of that, very few things in this business stay the same. So in some cases it was just a matter or perseverance and keeping up. But even if a wrestling movie full of injuries and death sounds great to the more cynical audience members, I don’t think we were totally prepared to deal with that.

Does the Lucha Libre style exist within the New York City area?

I: There are a few promotions that include Lucha matches, but one we’re particularly fond of is World Unpredictable Wrestling, WUW. They do a mix of authentic Lucha Libre and more standard American wrestling, and bring up great talent from Mexico. It’s a lot of fun.

A: There aren’t shows all the time, but you can find small promotions in Queens, New Jersey, the Bronx. World Unpredictable Wrestling is one of the best in the area. They’re doing a big show on Dec. 5 at La Boom, Queens, featuring some major Mexican wrestlers.

Do you have any goals for the movie? Anything that must happen in order for you to view it as a success?

A: In terms of commercial success, we hope to have a theatrical run in various U.S. cities, then VOD, Digital and DVD/Blu-ray so everyone can see it. I’d also say we want the wrestling community to embrace the film and hopefully feel that we captured it in an honest way.

I: We definitely hope the film finds an appreciative wrestling audience. But beyond that, we’d like to reach people who aren’t into it, and help them look past their prejudice. You don’t have to become a fan to appreciate the skill and talent of these performers, and understand how it can be enjoyed without irony.

How did you get involved with the DOC NYC festival?

A: Our last documentary, Better Than Something: Jay Reatard, screened at DOC NYC a couple years ago and we had a great experience. It made a lot of sense to screen the film with them.

I: We’re based in New York, and there’s nothing like a hometown premiere. Doc NYC is a great home for documentary, and a perfect fit for Lucha Mexico.

As a New York City-based filmmaker, what is it that keeps you based here?

I: I love New York City. Love it. Couldn’t think of another city I’d rather live in. I don’t have enough space to talk about how and why this city means the world to me. But I won’t deny, Mexico City is some fierce competition.

A: NYC is a multicultural city, full of art and life, and it inspires me. Of course work and the fact that my family lives nearby is what keeps me here.

Do you have a favorite movie theater in town? Or at least a place that you can trust with regards to its curated picks?

A: I’d say Film Forum and the Ziegfeld. Film Forum shows the classics and obscurities, and also great indie cinema. The Ziegfeld is just beautiful. I love the enormous space and the history. It’s where I saw Lawrence Of Arabia for the first time.

I: I don’t generally seek out curated programs. I prefer theaters where I can get lost in whatever film I’m excited to see. It could be the excellent Loews Multiplex up by Lincoln Center, or something more intimate like Nitehawk Cinema in Williamsburg.

When not working, how do you like to spend your free time?

I: Depends how difficult the work is. Shooting and editing a film can leave you drained mentally and physically. But I’m a compulsive media consumer; movies and TV, music, video games — so much good stuff out there, it’s hard to stop.

A: I’m always working in one way or another. Any free time I get I read, watch movies and research.

A: Go see Lucha Mexico! Without the support of the public and forums like this, indie films have no chance to find a home.

I: Just because it’s a documentary doesn’t mean it can’t be fun. If you’re interested in wrestling, or even if you hate it, come with an open mind and you might be in for a great time!

LUCHA MEXICO (Teaser) from Children of Productions on Vimeo.