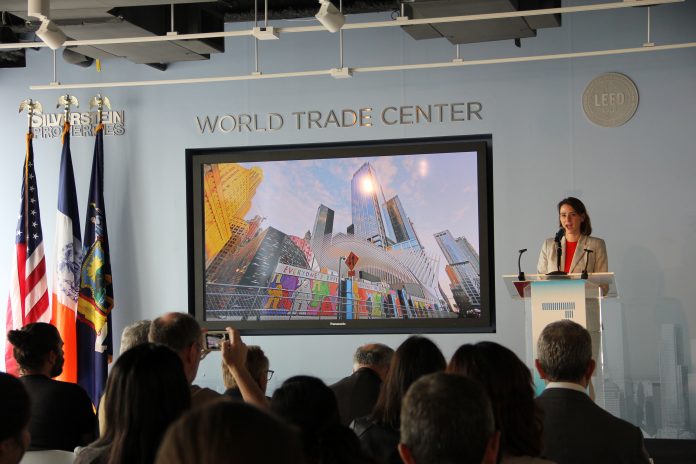 The employment was largely driven by strong leasing activity across industries. In total there were 2M square feet of deals in Lower Manhattan, which helped the district outperform all other submarkets during one of the busiest quarters in seven years.

“This milestone is important for both practical and symbolic reasons,” said Downtown Alliance President Jessica Lappin. “Practically, it proves that the rebuilding effort has diversified our city’s economy in a meaningful way while generating thousands of jobs in growth industries. Symbolically, it shows that our determination and spirit can never be broken. While our work is not yet done, this data speaks to our phenomenal growth and importance as an engine of opportunity for the city, state, and nation.”

“After 9/11, we all agreed that our primary responsibility was to commemorate those we lost,” said Larry A. Silverstein, Chairman, Silverstein Properties. “At the same time, we had to restore the commerce that has defined the lower tip of Manhattan throughout the City’s history.  At the end of the day, our vision was to create a better version of New York. That vision is now a reality. The bottom line is that Downtown New York – a place many had written off – is now the City’s hottest neighborhood.”

“As the home of New York’s largest TAMI Community and 9,000 workers, One World Trade Center is proud of its role in the revitalization of Lower Manhattan,” said Douglas Durst, Chairman of The Durst Organization. “We look forward to working with our partners to bring more exciting tenants, retailers and arts & culture to this fast-growing and dynamic community.”

The district’s retail and hospitality markets continued to thrive with 20 new restaurants, shops and hotels opening in the first quarter.  The new retailers included the highly anticipated Crown Shy, a seasonal neighborhood restaurant by Chef James Kent and Jeff Katz, and The Artezen Hotel, which brought 89 new rooms to the district.