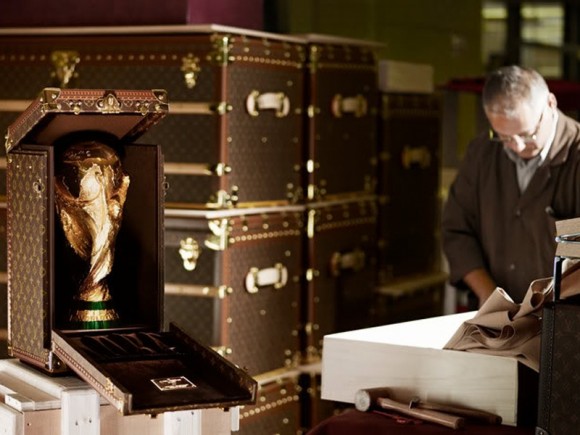 This edition of the World Cup has unleashed a whirlwind of excitement and surprises. And this just in: FIFA and Louis Vuitton are partners in design once again. The French Luxury House has announced their making of the one-of-a-kind hard cornered case that will be carrying the 2014’s Gold World Cup. The trophy measures 36 cm in height, weighs 6,175 kg and is made of solid 18-carat gold with a base of malachite. That said, perhaps it is no surprise that FIFA would trust the French fashion house with such invaluable hardware for a second consecutive time.

The World Cup’s case has been designed and handcrafted in Vuitton’s historic Asnières workshop. The workshop has also produced many other unique trophy cases in its 150 years of existence, including that of the America’s Cup, dating back to 1851.

The travelling case, surrounded by LV’s iconic monogram, will be officially introduced on July 13th by the end of the Final game held at the Maracana Stadium in Rio de Janeiro. Gisele Bündchen will serve as escort for the cup until it reaches the stadium on Sunday and is handed to the captain of the winning team. The question is, which captain will that be? IN MEMORY OF LAUREAN ENRIQUE OSSORIO