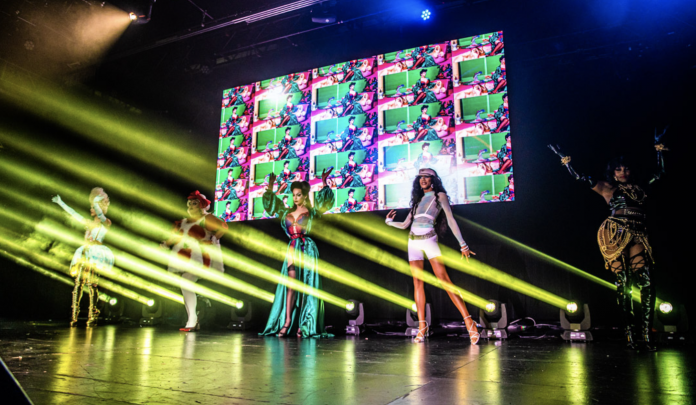 The audience was laughing and the queens were serving them looks, but one missing element from the show was the structure for all the drag queens to have equal stage presence.

On Friday, RuPaul’s Drag Race icons Trixie Mattel and Katya Zamoldochikova hopped off the subway, bustled through the nightmare that is Times Square, and hosted an outlandish drag queen event aptly named “Looks and Laughs” at the PlayStation Theater. The queens were joined by their friends Aquaria, Asia O’Hara, Kim Chi, Naomi Smalls, and Violet Chachki as they walked the runway and revealed their looks outfitted by Klarna. The show also featured the newly-crowned winner of RuPaul’s Drag Race Season 11, Yvie Oddly, alongside special live performances by Icona Pop and Kameron Michaels premiering her brand-new single, “Freedom.”

The show coincided with all the festivities that occurred for World Pride 2019 in New York City, but it was also the final installment of the “Shop Like a Queen” campaign launched by Klarna, an alternative payments provider for online shopping. The campaign partnered up with the five queens aforementioned to advertise the benefits of shopping using the Klarna App, provide insightful tips exclusively on the app, and help the queens curate their ideal NYC Pride look.

The campaign was created to highlight their newly redesigned app that lets users shop from any online retailer and pay for their purchases through installment plans, with as little to zero interest and fees.

The two-hour event began with solo performances from Trixie and Katya, with each of them switching off to let the other prepare for their next number. Trixie’s numbers consisted of a standup routine of poking fun at the audience, a satirical song about rich people problems, and even a rendition of Nicki Minaj’s “Anaconda.” Katya, on the other hand, told a hysterical narrative about her journey from Russia to making it in the United States and lip-syncing to American pop songs in Russian. The first hour ended with the duo lip-syncing an ABBA-inspired number with songs like “Waterloo” and “Dancing Queen” seeping into the crowd’s ears and an improved rhythmic gymnastics routine with twirling ribbons engraved in their memory.

In hour two, the show started off strong with the crowd witnessing Yvie Oddly perform a few oddball numbers, with one having her rap to her song “Dolla Store,” which talks about her obsession with the dollar store. Kameron Michaels came out as a surprise guest and got to perform her song “Freedom,” a Pride anthem that promotes the message for listeners to find the freedom within themselves and embrace who they are. Swedish duo Icona Pop ended up being the last few performances of the night, singing some of their hit songs before ending off on their well-known single ‘I Love It.”

As Icona Pop performed “I Love It,” Aquaria, Asia O’Hara, Kim Chi, Naomi Smalls, and Violet Chachki all strolled onto the stage one-by-one and walked the runway, premiering their Klarna-curated outfits. Aquaria wore a beautiful, Marie Antoinette-inspired outfit, Kim Chi fluffed out in an obnoxiously cute cherry-print dress, and Asia O’Hara stacked with chains upon chains along her body. The presentation of all five runway looks was phenomenal and the crowd was in an uproar while each queen walked the stage, but the timing and structure of their presence felt rushed.

This impression stems after all five queens walked the runway, they were presumably confused as to what purpose they had to be on stage. They stared at one another and talked amongst each other for a minute before deciding to walk off stage before any host announced the show was over. Five drag queens, who are known for their exceptional abilities as entertainers, spent hours backstage putting together their makeup and outfits for the night only to share the stage in tune to a song that lasted roughly three minutes sounds bizarre.

The atmosphere of the room suddenly shifted after an announcement was made that the show came to an end seconds after the queens left the stage. The music in the crowded venue toned down and the stage was wiped clean. Attendees met each other with puzzled looks on their faces, as to question the absurdity of the abrupt ending.

An issue on the prompt ending is met with critique, not on the drag queens, but the sponsors of the event – Klarna. This speaks on a broader issue of having artists exert an immense amount of time and energy into their artistry, but only to be met with little appreciation and space to promote their work. These drag queens are talented professionals, entertainers, artists and it should be acknowledged as such.

The queens could’ve been given the dignity to have their own, solo segments where they performed a number in their dazzling outfits and engage with their audience. The crowd could have interacted with the queens by choosing their favorite look determined by the loudest amount of cheers and chants. The opportunities for growth and acknowledgment for each of the queens times are endless.

It may be a drag to put down an event uplifting drag queens, but an artist’s worth deserves more appreciation.

Downtown Magazine also had the opportunity to interview a few of the queens prior to the show.