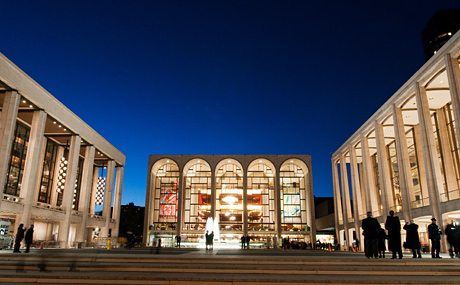 The 20th edition of the Lincoln Center Festival kicked off last week and will run through August 2, at the world’s leading arts and entertainment facility.

Things got off with a bang with Danny Elfman’s Music From The Films of Tim Burton. Audiences were treated to a multimedia experience of the landmark soundtracks, sketches, storyboards and clips from some of the director’s landmark films.

Audiences were treated to the brilliance of conductor John Mauceri with a guest appearance from Elfman, himself!

Moving forward, visitors to the center will be treated to performances by Ireland’s Druid Theatre Company which will perform The History Play, playwright Mark O’Rowe’s Irish take on Shakespeare, through July 19.

The Cleveland Orchestra performs this weekend at Avery Fisher Hall and  the Mostly Mozart Festival returns with performances featuring 22 artists making their festival debuts from July 25 to August 22.

There’s also the Lincoln Center Out of Doors Festival offers free entertainment throughout the summer at various outdoor locations with such top artists as the Muscle Shoals All-Star Band and Randy Newman.

“There is no other place in the world where you can experience such a diverse array of top notch artists and entertainers,” says President’s Council Member and noted developer Elie Hirschfeld.

“This is the public’s one-stop shop to the finest cultural events in the world in a newly optimized environment unmatched across the globe.”

Over the past 13 years, Lincoln Center has led the largest and most comprehensive redevelopment of any performing arts center in the world.

With 30 indoor and outdoor performance venues, Lincoln Center each year sells some 3.2 million tickets and generates more than $3.4 billion for the New York economy. More than one million students annually participate in education activities related to Lincoln Center.

The new Lincoln Center came to fruition under the watch of President Jed Bernstein who has invested with Hirschfeld on three different Broadway hits.

“Jed has shepherded the development of one of the greatest gifts New York City has ever received – the world’s greatest center for performing arts,” says Hirschfeld, a longtime patron of cultural institutions throughout New York City.

“I think we all should be grateful to him for this wonderful place.”