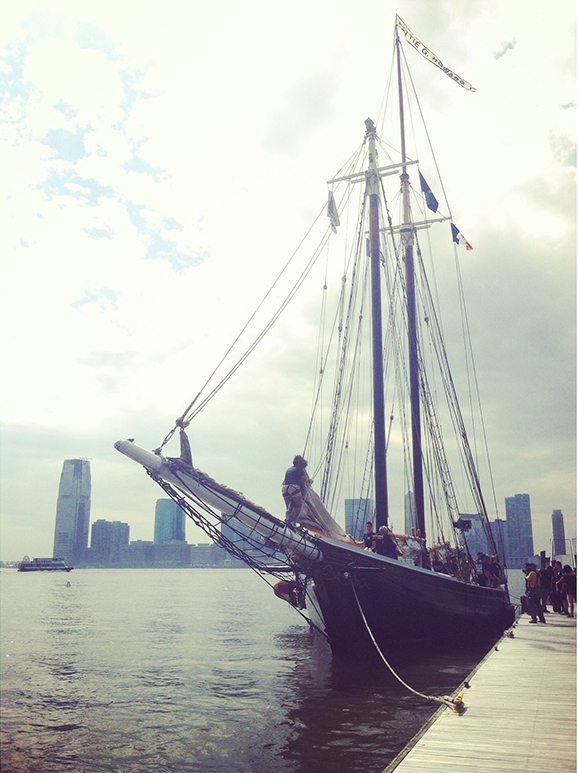 Pat Foye, the Executive Director of the Port Authority during his speech on-board the Lettie G. Howard.

Administrators, teachers, students and parents from the Urban Assembly New York Harbor School shared the infectious passion that drives each of them—their love for the sea, with Downtown residents at a special event at Pier 25 on Monday May 12th.

The Urban Assembly New York Harbor School, New York Harbor Foundation and South Street Seaport Museum took part in the event which put a spotlight on the work of the high school students to restore the historic Seaport vessel, the 121-year-old Lettie G. Howard and provide guests with vessel tours.

The Port Authority awarded $50,000 to the New York Harbor Foundation to help fund the restoration of the vessel as an educational exercise, giving the students the chance to get a hands-on experience they won’t ever forget.

The event marked the official launching of the “Two States, One Port,” a joint collaboration among the New York Harbor School, Port Authority and South Street Seaport Museum, with a specific goal of exposing and engaging students in the maritime operations of New York City.

“The future and resiliency of our port operations depend on the expertise of our next generation of maritime managers and leaders,’’ said Port Authority Executive Director Pat Foye. “That’s why we’ve chosen to support this worthwhile program for students so they can serve as future ambassadors for the East Coast’s busiest port.”

The Harbor School opened its doors in September, 2003 as New York City’s only maritime high school and seeks to graduate students equipped with the skills and experience to become tomorrow’s port industry managers. The school’s students cultivated skills in managing the Lettie, as they seek to restore the vessel as an integral curriculum component.

“We are working hard. We want to inspire people,” said Maya Perkins, a happy student of the New York Harbor School. The students of the New York Harbor School on board their favorite school project.

But this wasn’t the only message Fisher wanted to pass on about the program. “This port cannot be just about commerce and it can’t be just about nature,” he said. “It’s a harbor. And a harbor includes the commercial human element and the natural estuary element. It needs to be a place where we have continuing flourishing commerce in the port but then also have flourishing wild life and that the ecosystem gets stronger at the same time. That’s the really hard work of managing this port. And you have to train young people for it.”

And with the training came a valuable history lesson, along with others about teamwork.

“The Lettie G. Howard is a very special historic vessel with a very important role to play in the lives of these young people,”  said South Street Seaport Museum Interim President Captain Jonathan Boulware. “There are lessons learned aboard a sail training vessel that are not easily learned anywhere else: unique teamwork and leadership lessons. It’s a good program for the students, a good one for the vessel, and exemplifies the very best in maritime education, a critical theme for the Seaport Museum.”

From now on Lettie G. Howard will be used for education purposes. When  additional funding is secured, the school plans on utilizing the vessel for events such as Chesapeake Bay and Gloucester Schooner Days at the end of August, where students will sail the vessel alongside other schools from up and down the East Coast.

Purchased by the South Street Seaport Museum in 1968, Lettie — a 125-foot-long Gloucester fishing schooner — was designated a national historic landmark in 1989 and served as the sail-training vessel of Harbor School, traveling throughout the Port of New York and New Jersey and along the East Coast from 2003 to 2010. The Letti G. Howard vessel is put back in service with help from the kids from The Urban Assembly New York Harbor School .