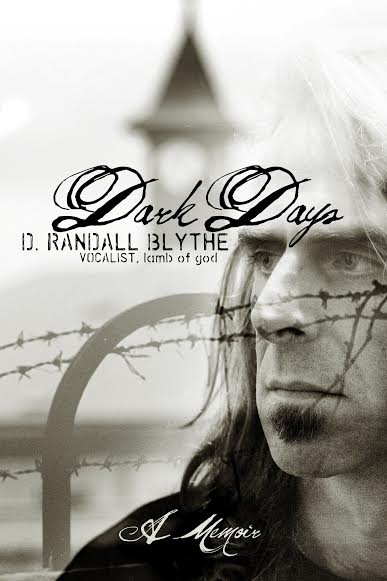 Imagine being in one of the world’s most popular metal bands, playing the sort of loud and intense set that you are accustomed to playing. But venue security in Prague isn’t quite up to snuff and one of the fans taking in your gig gets a little unruly. Suddenly, it is up to you to make sure that there is no repeat of what happened to Darrell Abbott on-stage about a decade back. You push that fan out of the way for both your safety and his.

For Lamb Of God frontman D. Randall “Randy” Blythe, this all turned into an international incident as the overeager fan died as a result of injuries sustained at this 2010 concert. Even though fan-filmed video footage proved that Randy was not to blame for this tragedy, Randy was still imprisoned in the Czech Republic on manslaughter charges. While Randy was ultimately acquitted of all charges in court, he still had to survive life in a Czech prison to get to that point. Published by Da Capo Press, a division of the Perseus Books Group, Dark Days is a memoir by Randy, finally telling his side of the events.

Entirely the opposite of a happy-go-lucky rock star memoir, Dark Days is about Randy’s journey, looking back on everything he went through in a land where one is not innocent until proven guilty. One does not have to be a metal fan – or even previously aware of Lamb Of God – to appreciate Dark Days, as it comes from the perspective of an introspective, good-natured person trying to do the right thing.

Randy kindly took the time to answer some questions about his various projects. As goes the writing in Dark Days, Randy’s answers are smart, focused and honest. Just as the answers of a future U.S. President would be? What do you wish more people knew about you, Randy Blythe?

Lamb Of God’s D. Randall Blythe: That despite the fact that I am the singer in a well-known heavy metal band, I don’t really listen to much heavy metal at all. People ask me all the time what my favorite new metal bands are, and tend to get disappointed when I tell them I’m not a metalhead and don’t have any answers for them. I’d rather be listening to Phoenix or SWANS or Bad Brains or Dexter Gordon. That, and the fact that I am secretly the Archduke of Canada — all of it — and that Canada’s TRUE name is “Earl.” I am…The Duke of Earl.

D: My book tells the story of what happened when I landed in Prague on tour with my band, was greeted at the end of a jetway by what appeared to be a masked SWAT team, handed papers reading that I was to be charged with manslaughter concerning an incident with a fan of my band that occurred two years previously at our last concert in the Czech Republic, and was promptly shipped off to a decrepit 123-year old prison. I had no memory of this incident whatsoever; regardless, after a bizarre month in prison and paying bail twice, I was released and returned back to the U.S. I was arraigned in the Czech Republic, and decided to return for my trial, despite the fact that I believed I was not guilty. Eventually, I was fully exonerated. The Kafka-esque situation I had found myself in is the plot of the story, a framework upon which to hang the theme of my book — personal accountability in a world that sorely lacks it. The book is my attempt, without being preachy or moralizing, to show that it’s okay to follow the ethical direction provided by one’s deepest moral compass, even when it’s very, very, scary. And Buster — you better believe I was scared.

When you were imprisoned in Prague, how did you pass your time?

D: I wrote song lyrics, essays, poems, the outline for a novella and journal entries detailing the day to day aspects of my life in a foreign prison. I did push-ups and squats and lifted the little furniture we had in our cell as weights. I got my ass kicked by my cellmate in chess every time we played. After a couple of weeks, I received some books written in English and read them. I learned as much as I could about the history of the prison. I meditated and prayed and tried very, very hard to remain grateful for what I did have, but get resentful about my situation and what I didn’t have. I spent a lot of time scheming on how to get cigarettes. I made sure I found something to laugh about every day, and I did my best to maintain a positive mental attitude.

What advice would you have for someone who is wrongfully imprisoned yet dealing with a media backlash happening on the outside?

D: Well, my case was rather unique as I was imprisoned in a foreign country and couldn’t talk to the media — the backlash was mostly from tabloid publications in the Czech Republic, which oddly enough, have a very large readership. The Czechs are not a dull or uneducated lot, and I do not understand why the number one selling newspaper in that country by far is the equivalent of The National Inquirer, but it is. You aren’t going to win in that situation, no matter what you say or do. Overall, I would say be very, very, very careful about who you talk to and what you say when you do. Control information about the reality of your situation as much as possible by speaking as little as possible. In today’s hyper-connected high-tech social media-driven world, people seem to have forgotten how to keep their mouths shut, even when it’s in their best interests. Irresponsible media, these so-called Internet “news sites,” are looking solely for click bait, and have zero problem with taking quotes out of context in order to provide their dubious readership with sensationalized, lurid headlines. This garbage is fed into the hive mind engine and endlessly reproduced at light speed with just a click of a button. It’s pretty impossible to defend yourself in this situation, so you’re better off keeping your mouth shut, no matter what is being said. Loose lips sink ships, so let your lawyer do the talking.

Do you foresee yourself writing another book in the future? A memoir about life in a band otherwise?

D: Absolutely, but not a memoir about my band. I’m already working on my next book, but it will be fiction — if something bad happens to someone in it, it won’t be me or anyone I know; I’ve had more than my fill of that. The story of my band doesn’t warrant a memoir at all, it’s pretty boring and slow paced. We aren’t very exciting behind the scenes, we don’t live wild, glamorous lives. Most of us don’t even really party anymore, so there’s not even any good drinking stories left. I have zero desire to churn out 500 pages of “We sat around backstage for 12 hours waiting to play for 45 minutes.” YAWN. If anyone wants to read a good band book, try The Dirt by Neil Strauss and Motley Crüe — now THAT is a rollicking tale. It comes from the era of music industry excess, the 1980’s, when there was still a ridiculous amount of money floating around to fund hijinks and people could get away with crazy stuff without worrying about it being uploaded to YouTube by some kid with a cellphone. The internet ruined rock-n-roll in many ways…

Now being an author beyond your music and a bit of acting, is there another field or occupation you haven’t yet tried but one day hope to?

D: I just had my first photography exhibition in NYC at Sacred Gallery [at 424 Broadway] — it was up for two months in May and June and did quite well. I want to get into podcasting, as that world really interests me. I enjoy a lot of narrative journalism-style podcasts. And I just wrote the treatment for my band’s last music video. Maybe one day I try my hand at script writing/directing.

Might we ever see another run for the U.S. Presidency by you?

D: Perhaps. It depends on how bad things get. Regrettably, my last run was interrupted by my legal ordeal, otherwise, obviously, I would be writing this to you from the Oval Office. My last bid for the Presidency was really just to illustrate how inane modern politics have become and how far away from dealing with any actual issues most campaigns are designed to be run. It’s one giant mudslinging contest, and campaign finance is a huge, huge problem — it makes me itchy just thinking about it. I suppose though, that if the people of my nation call loud enough, I shall be forced to answer. My fellow Americans…

Once you’re done with doing media for Dark Days, what’s ahead for your band?

Finally, Randy, any last words for the kids?

D: Thank you in advance to those who buy my book. I worked harder on it than anything else I have ever done in my life, and I’m pretty proud of the result. I hope y’all enjoy it. Listen to The Black Queen.