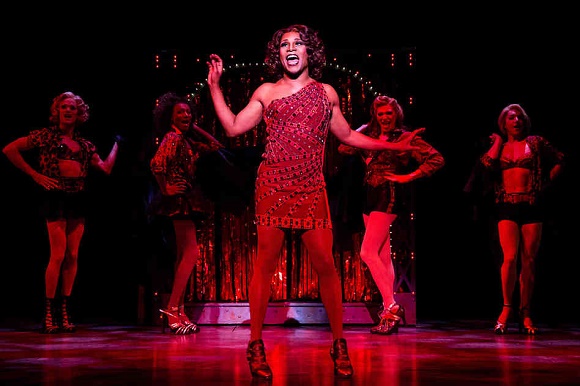 If the economic crisis of the late 2000’s taught us anything, it’s the fragility of the family-run business in the age of advancing technology. An aging patriarch may hold on to the ideals that made his business a success, but his old ways can potentially act as an albatross on the son who inherits the old-fashioned outfit, which has likely become obsolete in today’s contemporary business environment.

Kinky Boots makes a run for the finish line, in heels no less, to deliver a story of one business’s struggles to keep up with the times and find a new voice in this modern world. Following the death of his father, Charlie Price (Andy Kelso) inherits the shoe factory that’s been in his family for multiple generations, and he finds himself thrust into a world he never desired being a part of. To make things worse, the business is one of many facing closure, with seemingly no way to turn things around.

In the face of foreclosure, Charlie gets a saving grace in the form of Lola (Billy Porter), a charismatic stage performer and drag queen. Lola can stand tall, and dance flawlessly, in the tallest of stiletto heels. However, these heels are made for women, not men with a proclivity for femininity. So Charlie and Lola join together and hatch a plan to use Charlie’s ailing shoe factory to appeal to the untapped market of drag queen footwear.

Porter’s performance is truly magnetic as Lola beams off the stage with the kind of radiance even the most accomplished divas can’t duplicate. The moment he takes the stage in his sequent red dress, the audience responds with thunderous applause before he can even sing a word. Porter won the Tony Award for Best Performance by a Leading Actor in a Musical at last year’s ceremony, and over 500 performances later he is still commanding the role of Lola with absolute precision.

Aside from Porter’s versatile performance, other highlights of the show include the elaborate dance routines by famed director and choreographer, Jerry Mitchell. Wherever Lola goes, usually her back-up line is not far behind. The quintet of “Angels” brings Lola’s stage presence to a level of extravagance that captivates the audience through infectious music — written by pop icon Cyndi Lauper — and impeccable dance moves.

Kinky Boots is like a dream for any Broadway lover. Defined by extravagance and perpetuated by emotion, this production has something for everyone regardless of their sense of style. Drag queens and conservative business owners alike can come together and become swept up in the sensory experience Kinky Boots solicits. Lola’s introduction on stage grabs the attention of “ladies, gentleman, and those who haven’t decided,” and the enchanting production incites pure enjoyment and adulation.