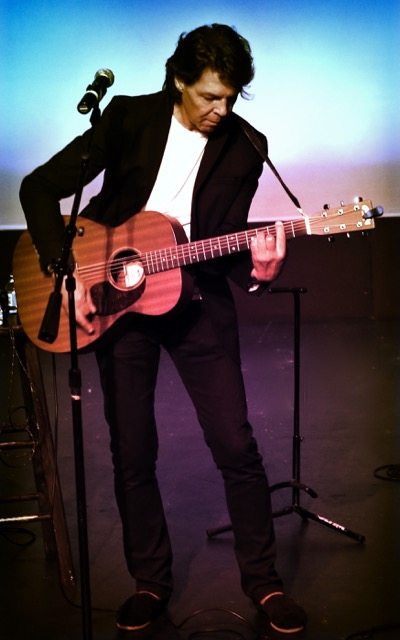 For the most elite of music fans that read liner notes and take note of the musicians and songwriters behind the hits, Kasim Sulton needs no introduction. For everyone else, Kasim Sulton is one of those musicians who you regularly hear the work of on the radio, at bars, at weddings, at sporting events, and practically anywhere where you hear music playing. As one example, he played bass and sung on Bat Out Of Hell by Meat Loaf. He has otherwise been a part of recordings by Joan Jett, Hall & Oates, Jon Bon Jovi, Cheap Trick, Celine Dion, and Mick Jagger, to name a few artists.

Beyond his session work, Kasim has been playing with Todd Rundgren for nearly 40 years. This long-standing musical partnership has included several incarnations of Utopia and also the semi-reunion of The Cars – called The New Cars – in 2006 and 2007. As part of Todd’s current lineup alongside keyboardist/guitarist John Ferenzik, guitarist Jesse Gress and drummer Prairie Prince, Kasim will be playing at the NYCB Theater at Westbury on Feb. 5; the tour hit Manhattan’s Gramercy Theatre back on Dec. 19. Todd Rundgren is not known for playing many of his hits live, yet this tour is of a different breed, titled “Fan Favorites.”

I had the opportunity to do some Q&A with Kasim, who put out 3 – only his third solo album despite a prolific solo career – back in 2014. When doing that interview, I had not yet realized that Kasim’s other band – Blue Oyster Cult — is also playing at the NYCB Theater at Westbury the following night on Feb. 6; I should have asked how tour scheduling usually works in situations like that. Either way, the guy works hard and was a pleasure to correspond with.

For more info on Kasim Sulton and his various projects, click on over to www.kasimsulton.com.

I remember seeing you live with Todd at Westbury when you had a broken foot and had to hobble on and offstage. Was that the biggest challenge you ever faced when touring?

Kasim Sulton: Touring is challenging, even when things are going smoothly. Living out of a suitcase, constantly moving around, keeping your focus and performing five nights a week can tend to wear you out over the course of a month, but I don’t think I’d do well punching a clock day in and day out. I will admit that touring with a broken foot wasn’t easy, but at least I didn’t have to stand on it for 90 minutes. I chose to sit on a chair for those shows. Made it a lot easier.

You also worked with Todd in The New Cars a decade or so ago. Looking back, was being part of that band an enjoyable experience?

K: That was a great experience. I’ve been close with [Cars guitarist] Elliot Easton and [Cars keyboardist] Greg Hawkes for a long time, and the idea of “reinventing” The Cars with Todd, Prairie Prince and myself had the potential of being a band that should have lasted longer than it did. Unfortunately, just as we were gaining momentum, Elliot was injured when our tour bus stopped short and in the middle of the first tour, we had to cancel a bunch of shows so he could recover. That interruption effectively prevented us from maintaining the attention we received up to that point. The band went on to do more shows, but getting back that initial excitement was next to impossible.

You have been working with Todd for over 30 years. Most marriages don’t stay together that way, let alone bands. How is that you guys manage to stay on such good terms for so long?

K: I like to think that I complement Todd. Granted, Todd has many “faces” when recording and performing live. He’s done shows completely solo, EDM tours, big band tours — 10+ people on stage – [while] most of his solo records don’t involve any musicians other than himself. But it seems I’m always working with him. Comfortability? Familiarity? I’m not sure. I do know that we sing well together, I respect his talent and over the years have gotten to the point where I know what he wants and expects from another musician without having to have it spelled out…April [2016] will mark my 40th year working with Todd.

Some people know you primarily as a member of Utopia and Todd’s band, others for your sideman work, others for your solo career. When a stranger asks what you do for a living, do you have an easy way of describing yourself?

K: I just say “I play music for a living.” I’m not sure it needs to be more complicated than that. Although, if I feel the need to be slightly sarcastic for some reason, I’ll say “I travel for a living.” Because when you really think about it, I’m traveling more than I’m actually playing music. I recently did a show with Blue Oyster Cult. We were playing in northern California. I left my house in New York City at 5 a.m. Drove to JFK [Airport] for an 8 a.m. flight to San Francisco. Got into San Francisco at noon and drove four hours up to Eureka, California, where the show was. We played for about 90 minutes and turned around and did the entire trip in reverse. It was something like 16 hours of traveling to play for an hour and a half. I’m tired just explaining it to you!

Who was the first sideman that you really took note of?

K: Probably Ronnie Wood when he was in The Jeff Beck Group. It was a very short stint for him. Maybe a year, at best. But his bass playing on the Beck-Ola record is some of the most amazing stuff I had heard at that time. It wasn’t just “bass parts.” He was adding a dimension to the songs that made them so much more exciting. So of course that piqued my interest and I started incorporating that kind of playing into what I was doing. Maybe it had something to do with the fact that, like myself, he was a guitar player first and a bass player second.

In spite of your prolific nature as a musician, you’ve only made three solo albums that I’m aware of. What sparked the creative of “3,” your latest solo release?

K: I’m always writing songs. Some take longer than others. I’ve never been an artist that sits down and cranks out record after record. Wish I could do that. I pain over each and every note, lyric and chord change. Because I’m constantly working with other bands and artists, I have to find short periods of time between other tours to work on my material. Put those two facts together and it’s no wonder it takes 10 years for me do a solo record. I do feel 3 is my best work yet and I’m very proud of it. How would you describe 3 to someone who’s familiar with your work with other players but hasn’t yet heard it?

K: 10 really good songs. Melodic and thoughtful. It’s really a good-sounding record with some stellar musicians performing along with me. I even have the other three members of Utopia on this record; Todd, Roger Powell and Willie Wilcox appear on a couple tracks.

Are there any plans for a solo show in the New York area anytime soon?

K: I just played at The Cutting Room in November, and I’m planning on something very special later in the year. It’s a little too soon to say what it is exactly other than it will be a live show featuring me.

Do you remember the first gig that you ever played in Manhattan?

K: Probably Reno Sweeney with a band called Sleepy Hollow. This would have been 1973!

K: That’s a very good question. One that I’ve yet to figure out the answer to. To make it easy I usually say I’m from New York City. That saves me the angst of trying to be grammatically correct.

Do you have a professional accomplishment that you’re most proud of?

K: Two things really. Playing bass on Bat Out Of Hell. It’s the third biggest-selling record of all time. Right behind Thriller and Dark Side Of The Moon. The other would be writing the only hit single Utopia had, “Set Me Free.”

K: Oh, I putter around the house. Love to cook and I make a pretty good eggplant parmigiana. Gotta sweat the eggplant first.

Finally, Kasim, any last words for the kids?

K: Follow your heart. Dream big. Be kind to others. Try new things. Don’t take yourself too seriously. Love honestly.