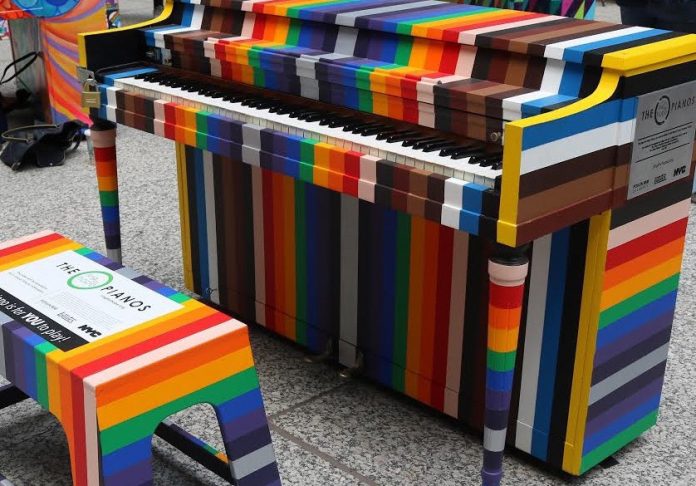 The month of June is a great time to be a piano in New York City. The Fosun Plaza at 28 Liberty on June 3rd was a hub of vibrant color and music in honor of the unveiling of the fifty Sing for Hope 2019 piano art pieces, and musicians and music-lovers alike attended the event to enjoy and create music.

Downtown spoke with twelve-year-old Joshua Turchin, one of the younger musicians who was sharing his music in the plaza, about his passion for music and musical theatre, and his bright future in the industry.

Turchin is already a star at age twelve; he has performed in two Broadway National Tours, is the host and creator of the Early Night Show cabaret, has written the music, lyrics, and book for his own musical, which debuts in August. His energetic presence as a performer and musician make him stand out from the rest, whether his stage is in a theater or on the bench of a piano in a public plaza.

Downtown: How long have you been playing piano?

Joshua Turchin: I’ve been playing piano since I could first reach the keys, but I officially and professionally started taking lessons when I was four.

DT: Do you play any other instruments?

JT: I actually play eleven other instruments other than piano, all my instruments together are piano, guitar, electric guitar, drums, accordion, harmonica, cajon, ukulele, recorder, banjo and ocarina.

DT: So you mentioned you wrote a musical, what is it about?

JT: It’s about the business, it’s about a girl named Alexandria, a struggling actress…It was just accepted into a theatre festival called the Rave Theater Festival, it’s a brand new theater festival.

DT: So what brought you to this particular event?

JT: So, I first started working with Sing for Hope when earlier in January at Broadway Con, I stumbled on their piano cause I had a panel there with the band I created, Broadway Kids Jam, and I just started playing it and I introduced myself to Mel, and I’ve been working with them ever since! I sometimes play at Port Authority, and we were invited here, and I came here and I’m like oh my god pianos! It’s incredible.

Joshua Turchin’s personal website is https://www.joshuaturchin.com/, and information about Rave Theater Festival is available at http://ravetheaterfestival.com/. The Perfect Fit debuts on August 11th at 4 pm and runs on August 12th, 18th, 19th, and 23rd. Tickets are available at https://ci.ovationtix.com/35213/production/1012928.